The Waorani community of Ñoneno, near the Yasuní region of the Ecuadorian Amazon, is developing projects to protect their area from numerous threats, including oil exploitation, poaching and colonisation.

The Rainforest Information Centre has a long history with the leaders of this struggle for autonomy, which began in 1991 when massive oil expansion plans by multinational companies in Waorani territory evoked a new era of land defence activism.

Read below for a dive into Rainforest Information Centre's archives, how we're currently supporting the community, and what you can do to help! 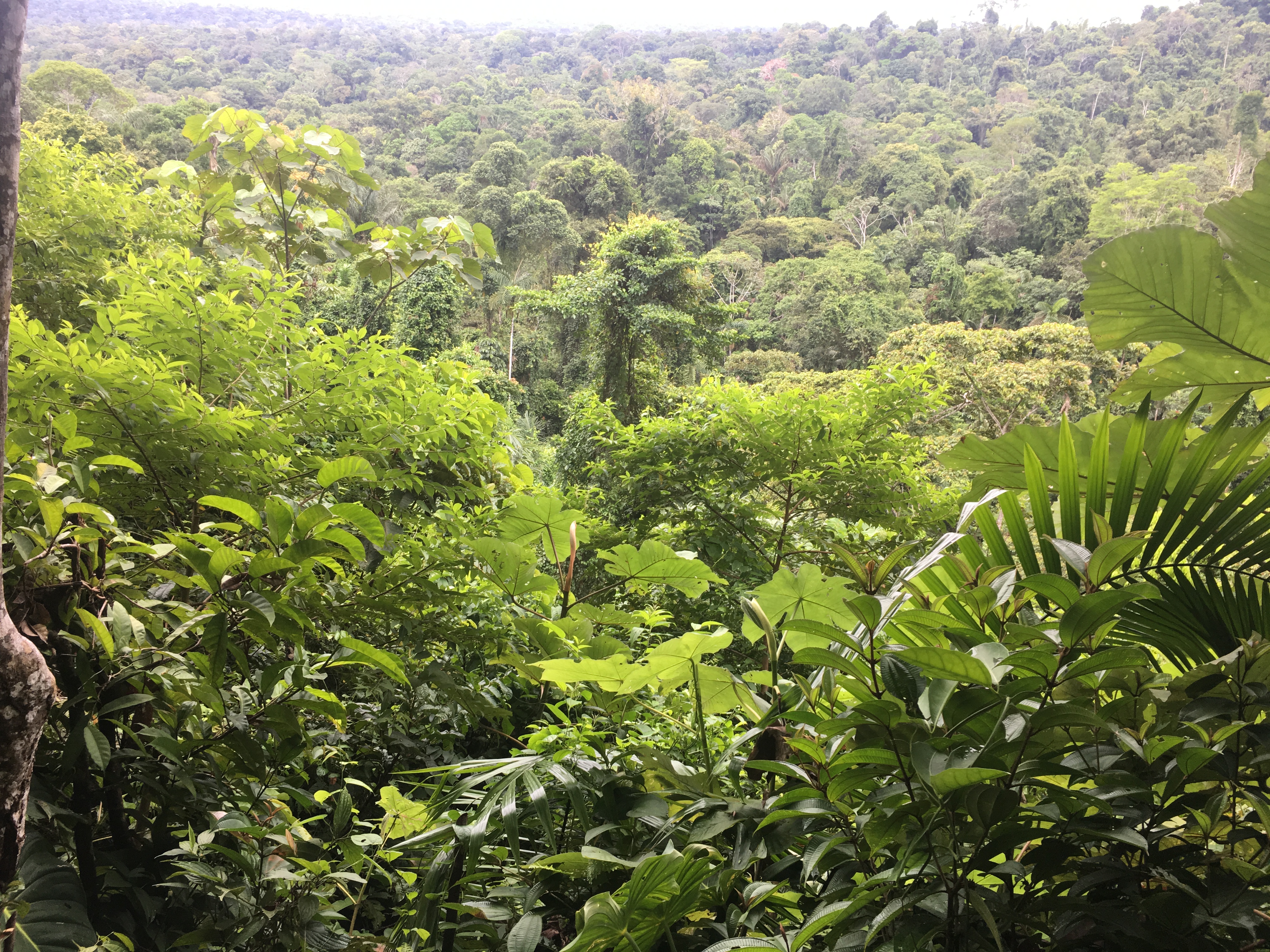 History of the Rainforest Information Centre in Waorani lands

In the early to mid 1990s, Rainforest Information Centre, along with other allied grassroots organisations, worked extensively with Waorani leaders, supporting their struggle to keep multinational oil companies out of ancestral lands.

RIC volunteers in Ecuador pioneered a method of delineating remote Indigenous lands, known as 'line cutting', which involved clearing a narrow strip of native vegetation and replacing with trees of an obviously different species.

The epic struggle of the Waorani against mega-extractivism, corruption and greed was told by activist and journalist Joe Kane, in his 1995 book 'Savages'. The book calls out the racist slur applied by industry, government and the public to Indigenous people in Ecuador, and points to the 'real' savages - ie, the companies, corrupt government entities and invaders who seek to plunder the land at all costs. 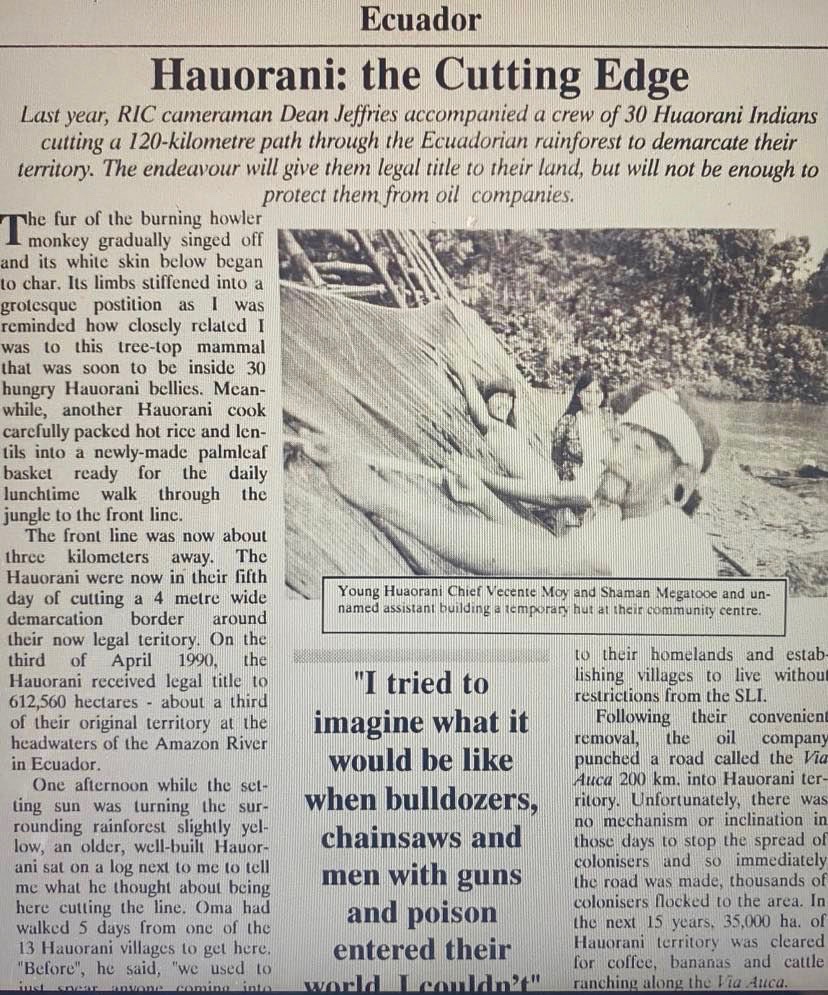 Page from RIC's volunteer-produced, anarchist-style newsletter "World Rainforest Report" 1994. To read this story and more from the time, you can access the edition here.

While these boundaries have been crucial for the Waorani to establish political rights over their land, it hasn't stopped the oil companies.

Today, the fight continues on many fronts. 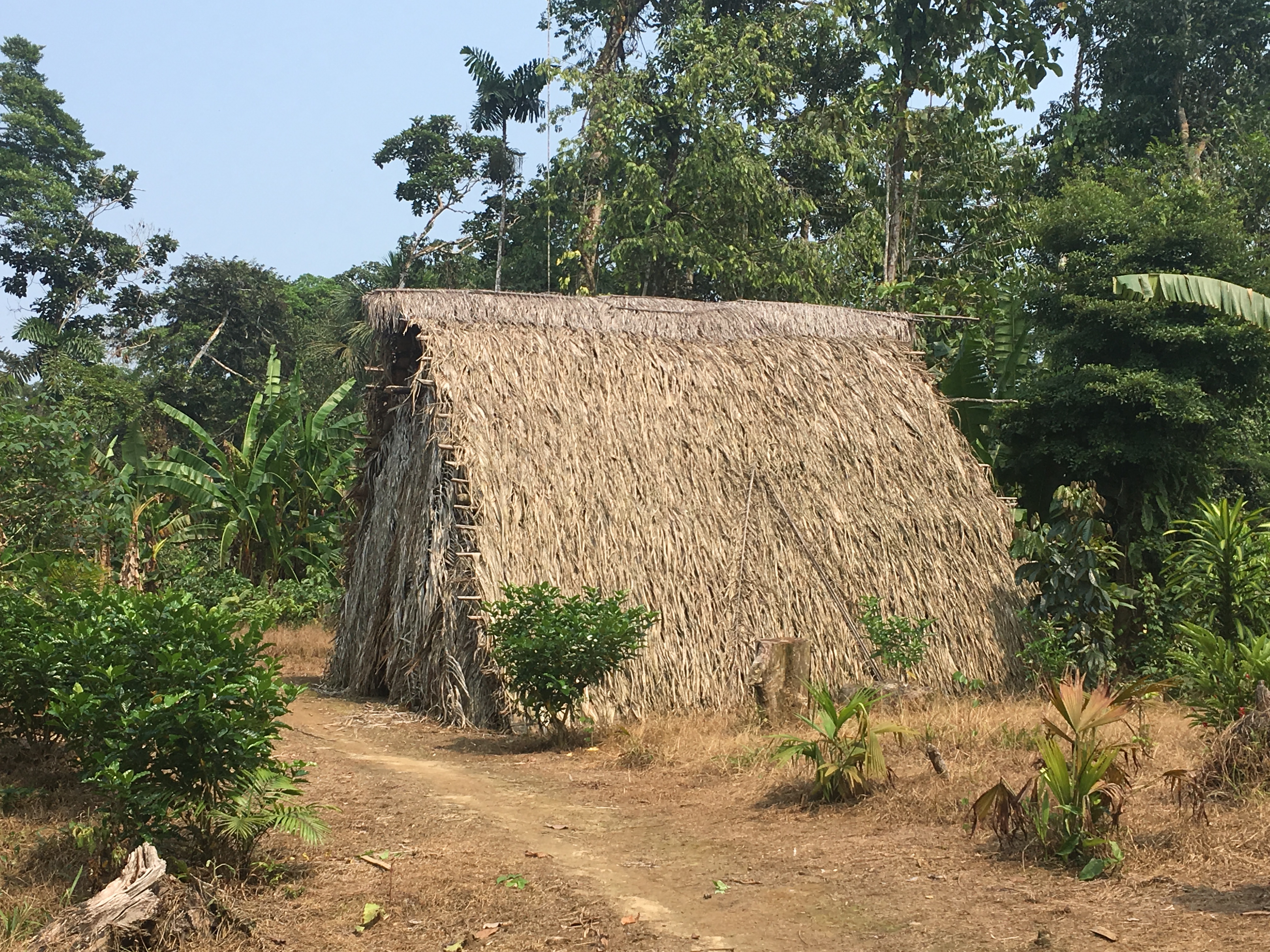 In April 2019 the Waorani won a landmark Constitutional Court case annulling the oil concession block 22 covering pristine rainforest in the province of Pastaza.

The win, which was based on the violation of Indigenous rights to free, prior and informed consent by oil companies, was a crucial legal precedent and major victory for Indigenous sovereignty. It served as a catalyst for Ecuador's nationwide social movement against grand scale oil and mining extractivism.

Meanwhile other parts of the territory, which have already long suffered oil exploitation, are still fighting. Further north in Orellana Province, tracts of mega-diverse Amazon rainforest are riddled with oil wells, roads and pipelines.

The Vía Auca was one of the first oil roads built into Waorani territory in the 1970s, soon after evangelist missionaries invaded and established a "protectorate" in the far western edge of the lands. It was blazed by Texaco (now Chevron) - a company which is infamous for causing the Amazon region's worst-ever oil contamination disaster, only a couple of hundred kilometres north of this area. 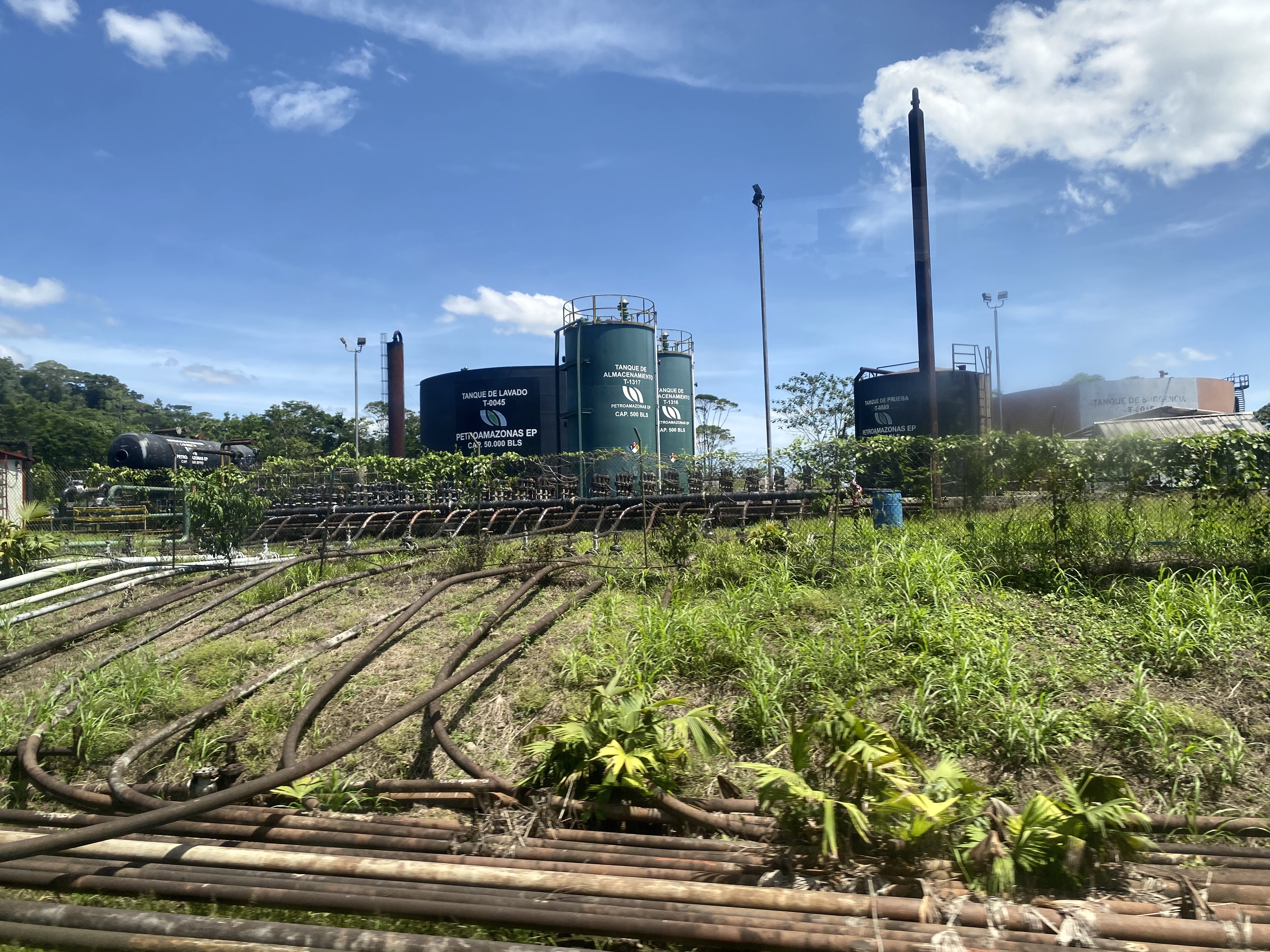 Oil infrastructure on the Vía Auca

Further north, part of the world renowned biodiversity hotspot, Yasuní National Park, is under the oil concession Block 16. Here, successive companies have tried to apply divide and conquer tactics, such as funding schools and sports stadiums and bribing people with alcohol.

The damage done to ecosystems and waterways by decades of exploitation is not quantified, though local testimony points to significant water contamination and impacts on plant growth around oil wells. There are currently over 100 operating wells along the Block 16 road between the Napo and Tiputini Rivers.

Oil development is also entering the lands of two tribes, the Tagaeri and the Taromenane, who are living in so-called 'voluntary isolation' - a misnomer, since these people's homes are being encroached and threatened from all sides as we speak. 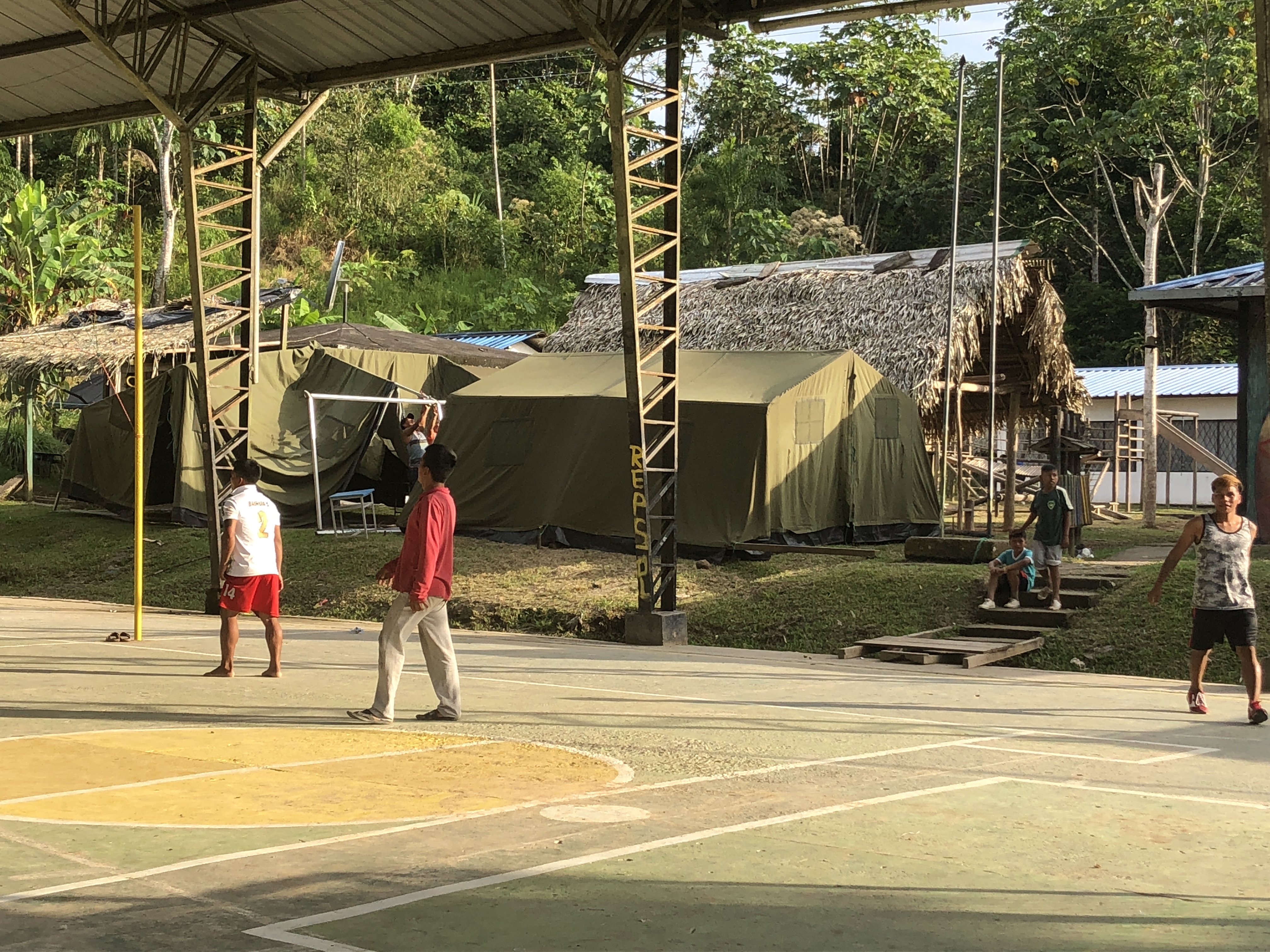 The name of a Spanish oil company, Repsol, carved on a pole at a volleyball court in the community of Guyero, Tiputini.

Community leaders, Nanto Huamoni and Alicia Cahuiya, requested our support in 2018 after a RIC campaigner visited their home village of Ñoneno.

The community is not yet directly impacted by oil drilling. But it is situated less than 100kms from Block 16, and occupies a strategic position on the Shiripuno River, which is a route for poachers, colonists and oil companies. Over decades, many crude spills have flowed down the river from the pipelines, wells and infrastructure at the Vía Auca, with unknown impacts on wildlife.

This part of the Shiripuno provides a buffer zone for the Taromenane people, whose land boundary runs close to Ñoneno. Communities along the river are dedicated to protecting the lives and sovereignty of their neighbours. 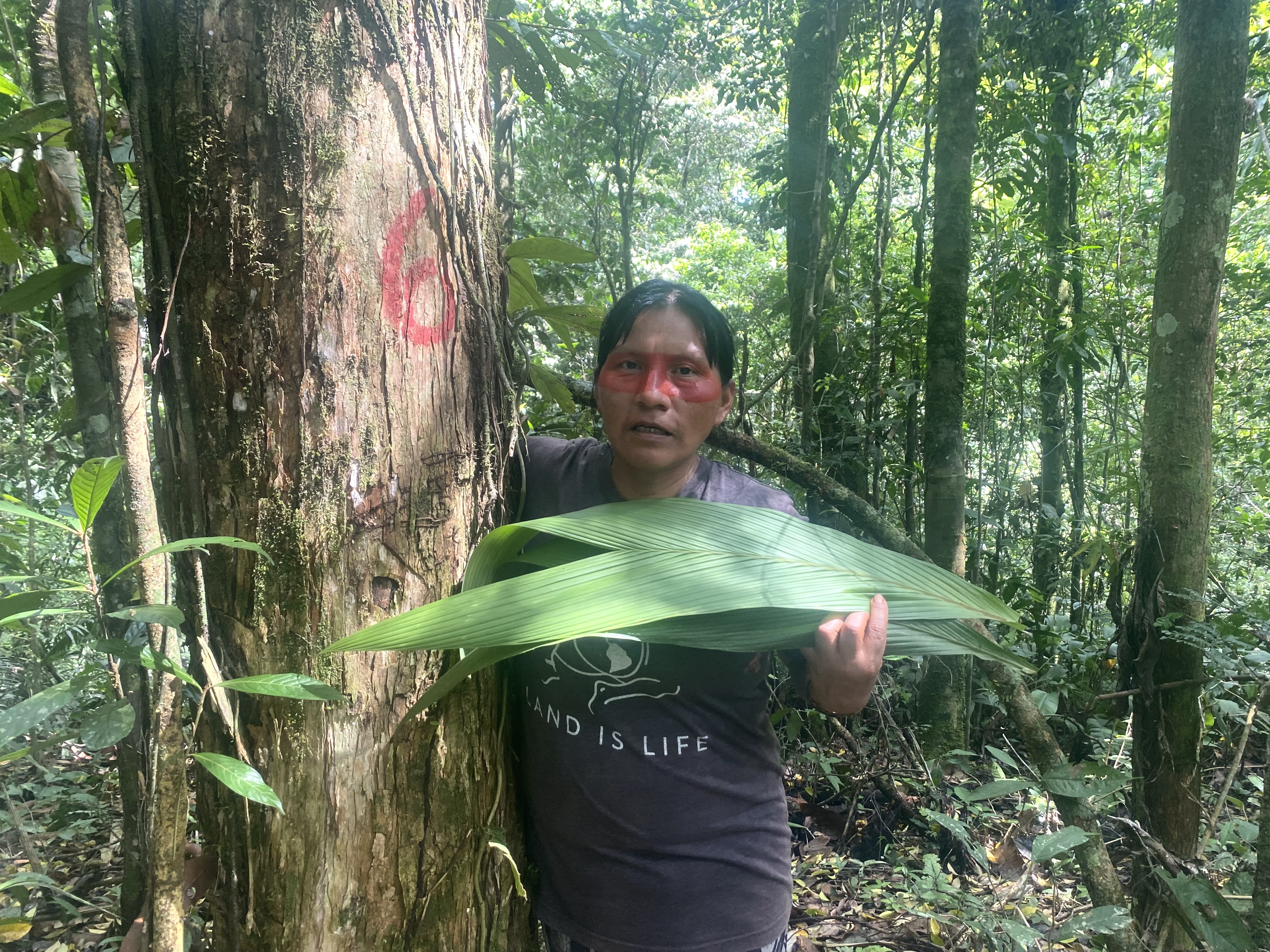 Alicia Cahuiya stands next to a tree marked to be cut down in an area secretly gazetted for a Petroecuador oil well near the community of Ñoneno, 2022. The tree is a critically endangered species.

Nanto is a university-qualified tour guide and old friend of RIC from the line cutting days, when he was a young activist and president of the first Waorani political organisation, ONHAE. Alicia works for CONAIE - Ecuador's national Indigenous Federation - and travels all over the world fighting for her land and sovereignty.

They have a large family, including six daughters, one son and several grandchildren - all of whom are in various stages of school, university and jobs, but maintain a close involvement with Ñoneno and its future. 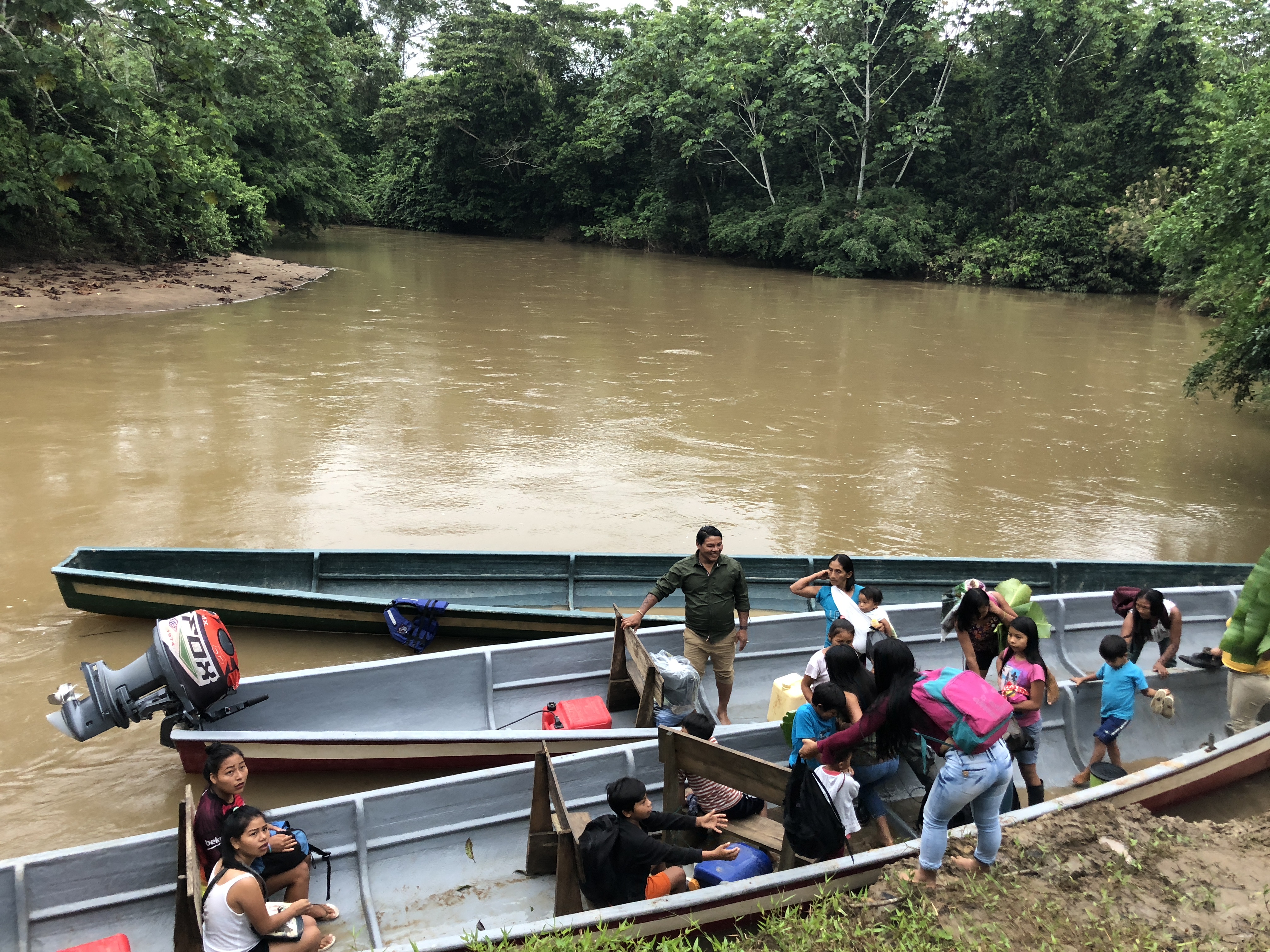 Ñoneno family preparing for what turned out to be a very wet, rainy trip down the Shiripuno River

In 2019, RIC awarded a grant of $3000 US to the Ñoneno community, to build a traditional house and infrastructure for visitors.

The kind of visitors they plan to attract are biologists, ecologists, linguists and other scientists and students who can help them preserve their knowledge and pass it on to the next generations. Only three months after receiving the funds, the two new houses were built.

The community, after being hard hit by Covid and travel disruptions over 2020 and 2021, is now starting to pull in funds from visitors.

Ñoneno is committed to remaining completely independent, both of oil companies and the government. The family also has a goal to bring people back home - who have been surviving in the towns and cities - by developing a culturally based local economy.

"Our forest is our life, which we share with our neighbours, the Taromenane Waorani ... we share our pharmacy of medicines, our wise elders who have the spirit of the jaguar, the knowledge of the medicines. (Our forest is) like a hardware store for all the materials we use to build our houses; it's our pharmacy. This is important for the whole world, not just for ourselves.

We hope that you can help us ... we say to the world that we don't want oil." 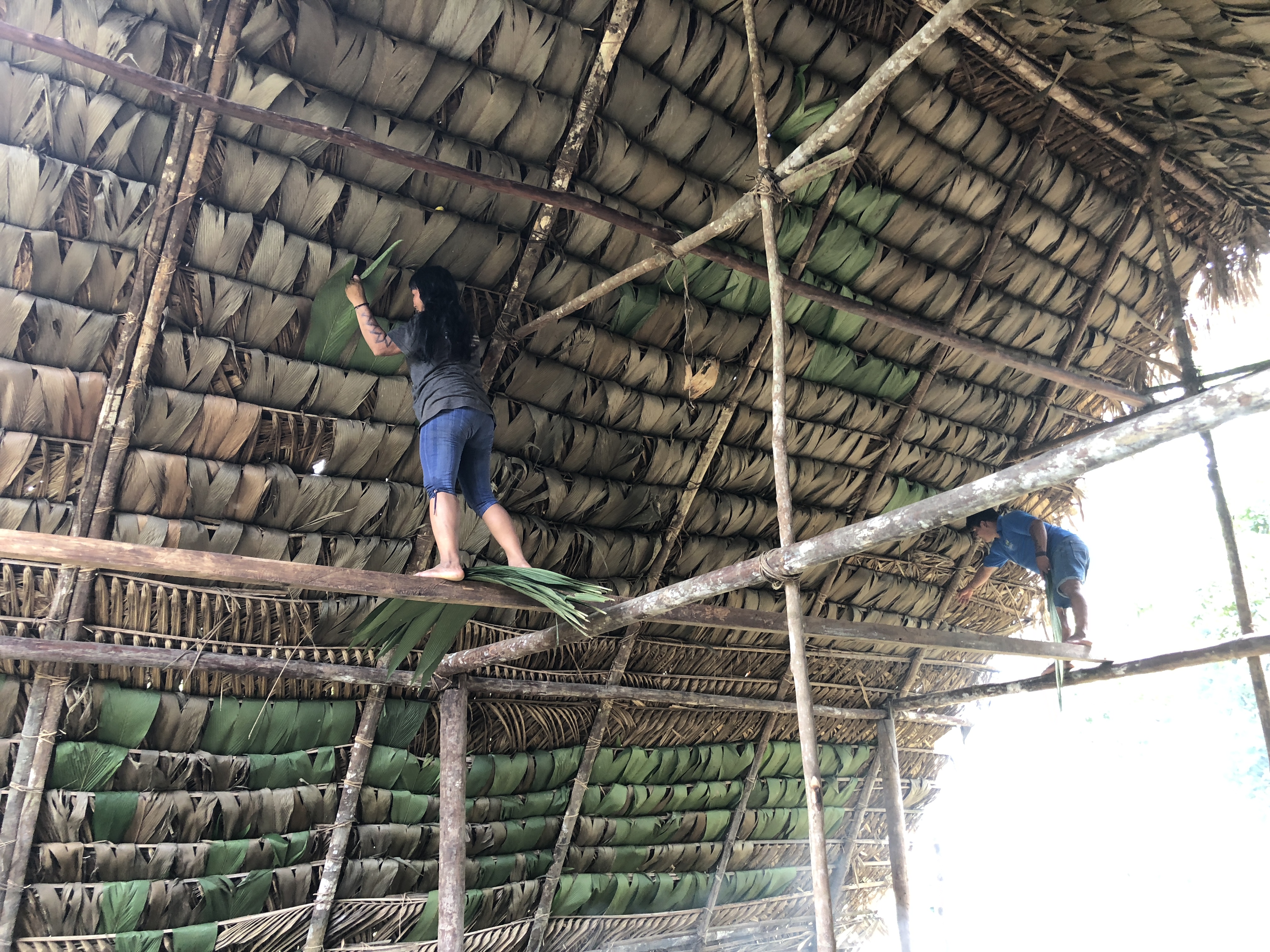 Completing the roofing on the main visitor's house at Ñoneno

Minta Lodge is situated four hours down the Shiripuno River by canoe from the city of Coca, in one of the most biologically intense places on the planet. The area is home to iconic Amazonian wildlife such as jaguars, anacondas, caimans, giant otters, woolley and spider monkeys, and a fantastic diversity of birds and insects.

(In 2018, a RIC volunteer was lucky enough to witness a family of rare and endangered giant otters barking at the canoe, and being answered back by all the Waorani kids on board the boat; unfortunately she has no evidence of this, as her phone was dropped in the river during that trip).

The lodge constitutes six ensuite cabins, each sleeping four people, a communal house, and a kitchen and outdoors undercover dining area. It was until 2020 operated by bootlegging tour operators from Quito, with most of the money haemorrhaging out of the community, and the Waorani receiving virtually nothing.

The community has now reclaimed their rightful ownership over the property.

Minta is the Wao language (wao tedero) word for the guacamayo, a large red-feathered bird in the parrot family who lives in large flocks in these parts. 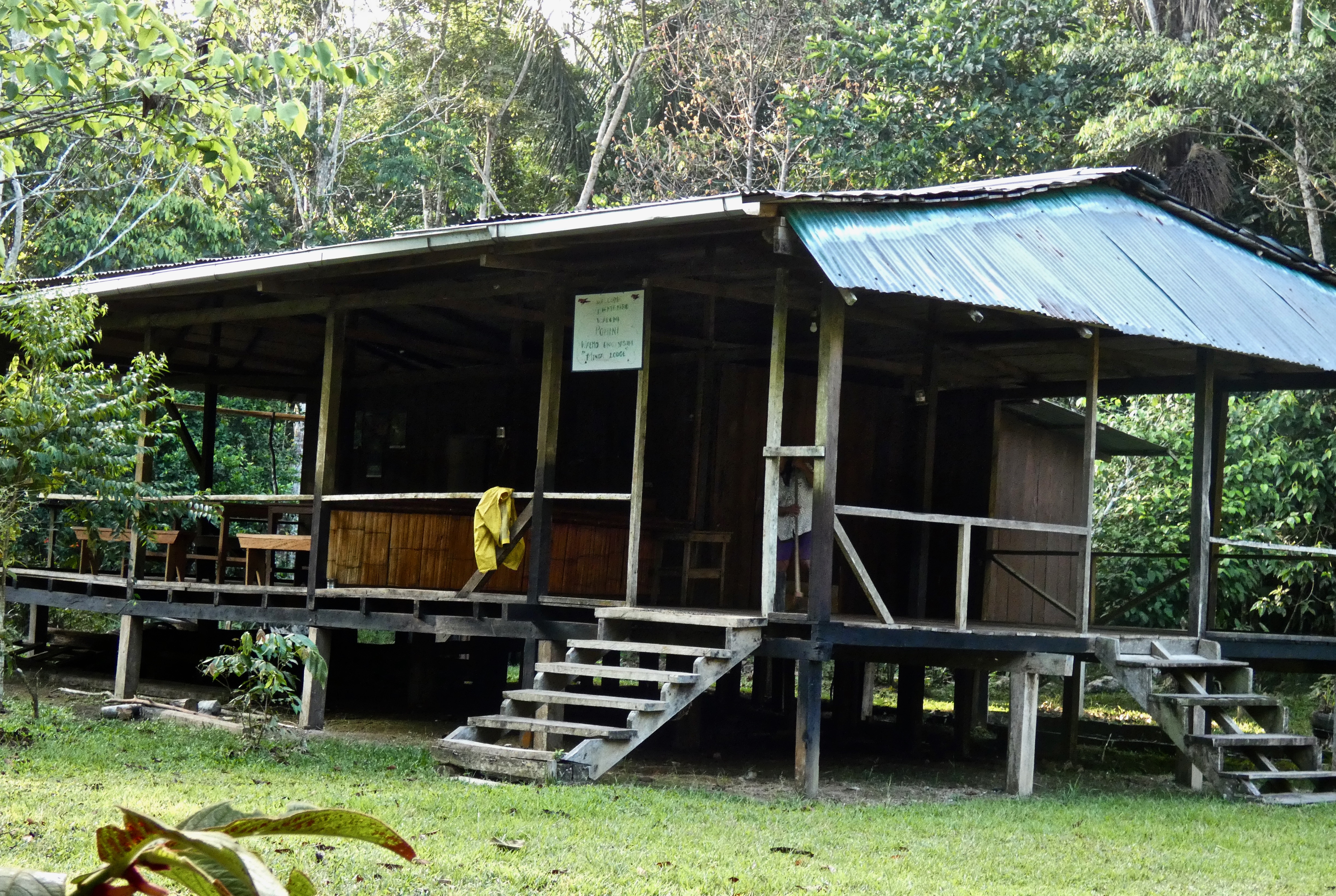 Cleaning up Minta Lodge for visitors

- Provided $1000 for a laptop for Nanto, who has been using it to collate and write coursework for ecotourism and cultural education projects. We

- Crowdfunded $500 towards repairs and maintenance for Minta Lodge, in preparation for their first large group of university students in January 2023

- Assisted with funds for transport costs for a Waorani land defender to travel to communities around the territory and campaign for a leadership position in the organisation NAWE (Nacionalidad Waorani de Ecuador), in order to help consolidate NAWE's no-compromise stance against oil exploitation in the territory.

As of the first half of 2023, we are raising funds for solar panels for both Minta Lodge and Ñoneno. These are necessary as an alternative to generators, which are noisy, give off diesel fumes and frighten away wildlife. One solar panel designed to last in the challenging weather conditions of the deep Amazon costs around $3000, including installation. A total of $6000 is needed for two panels.

We are also keen to use our crowdfund to support Waorani mobilisations to defend the Yasuní region and the lands of the Tagaeri and Taromenane from oil exploitation. 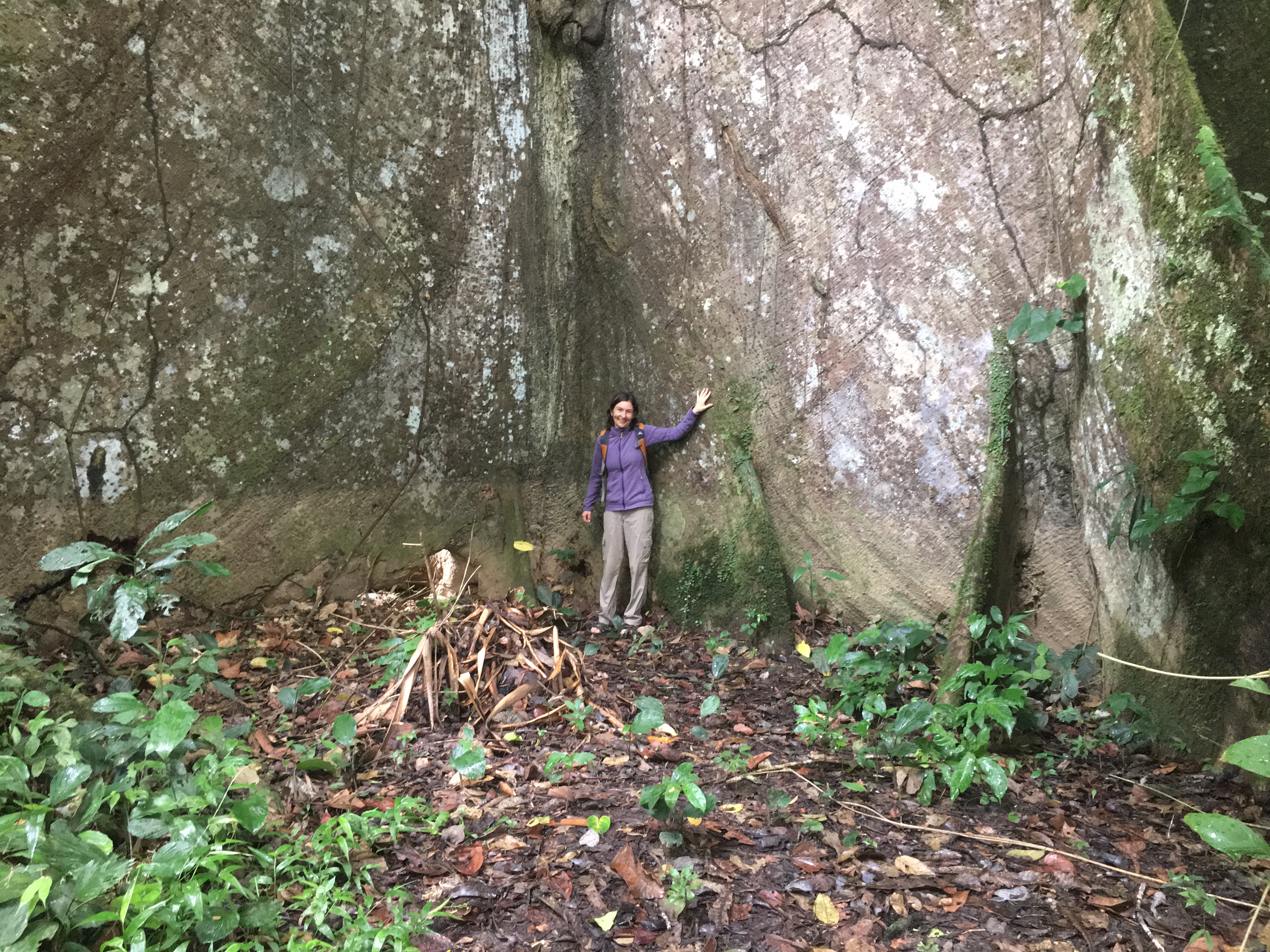 You can download most editions as a PDF for easier reading. 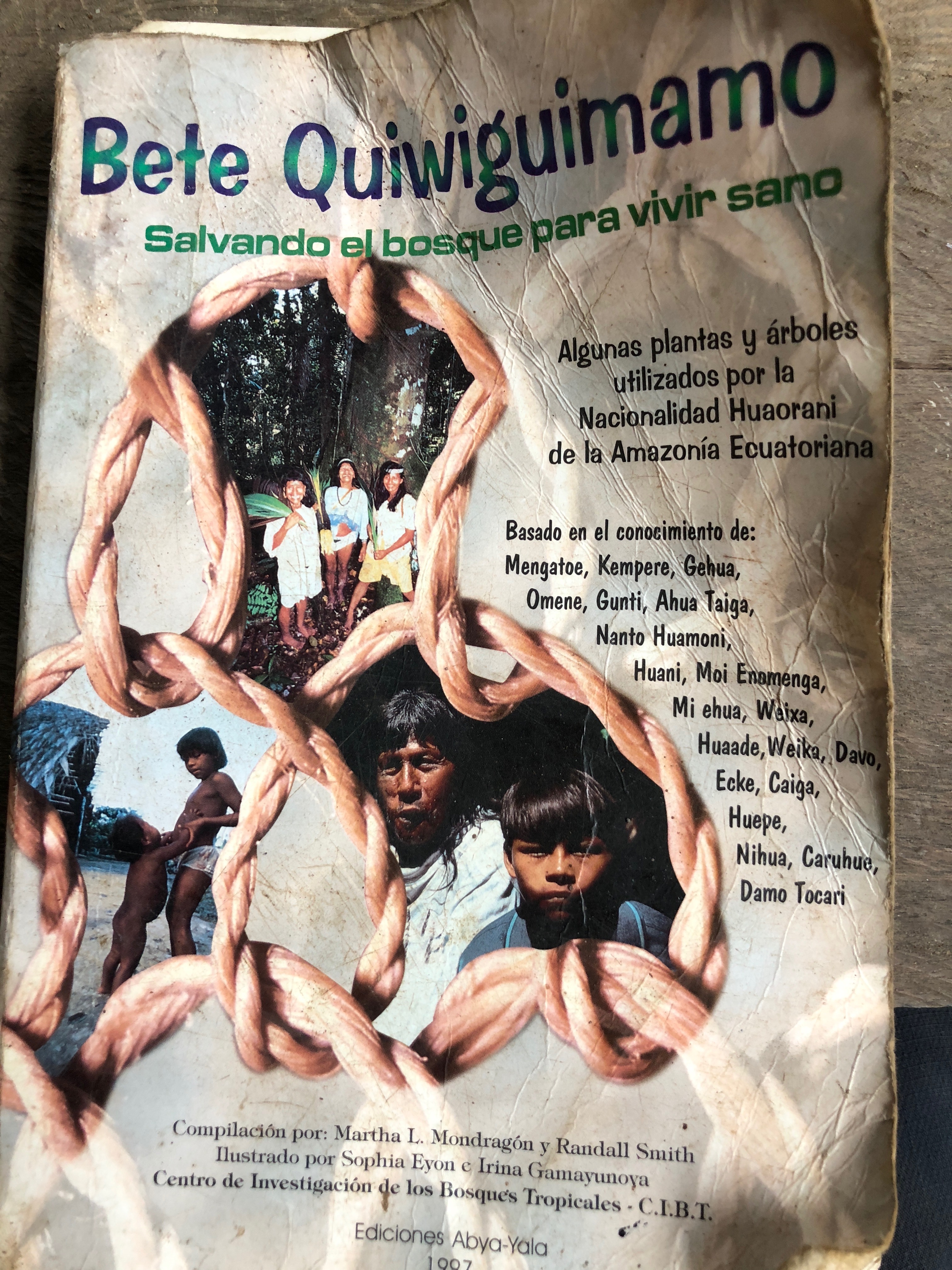 This unique book, which describes hundreds of traditional Waorani plant foods, medicines and other uses, was co-written by the Ñoneno community with RIC volunteer Randy Smith in 1996. It is now out of print, but dog-eared and much loved copies are still circulating around the communities today, and are being used to teach the younger generations and as text in tourism programs.