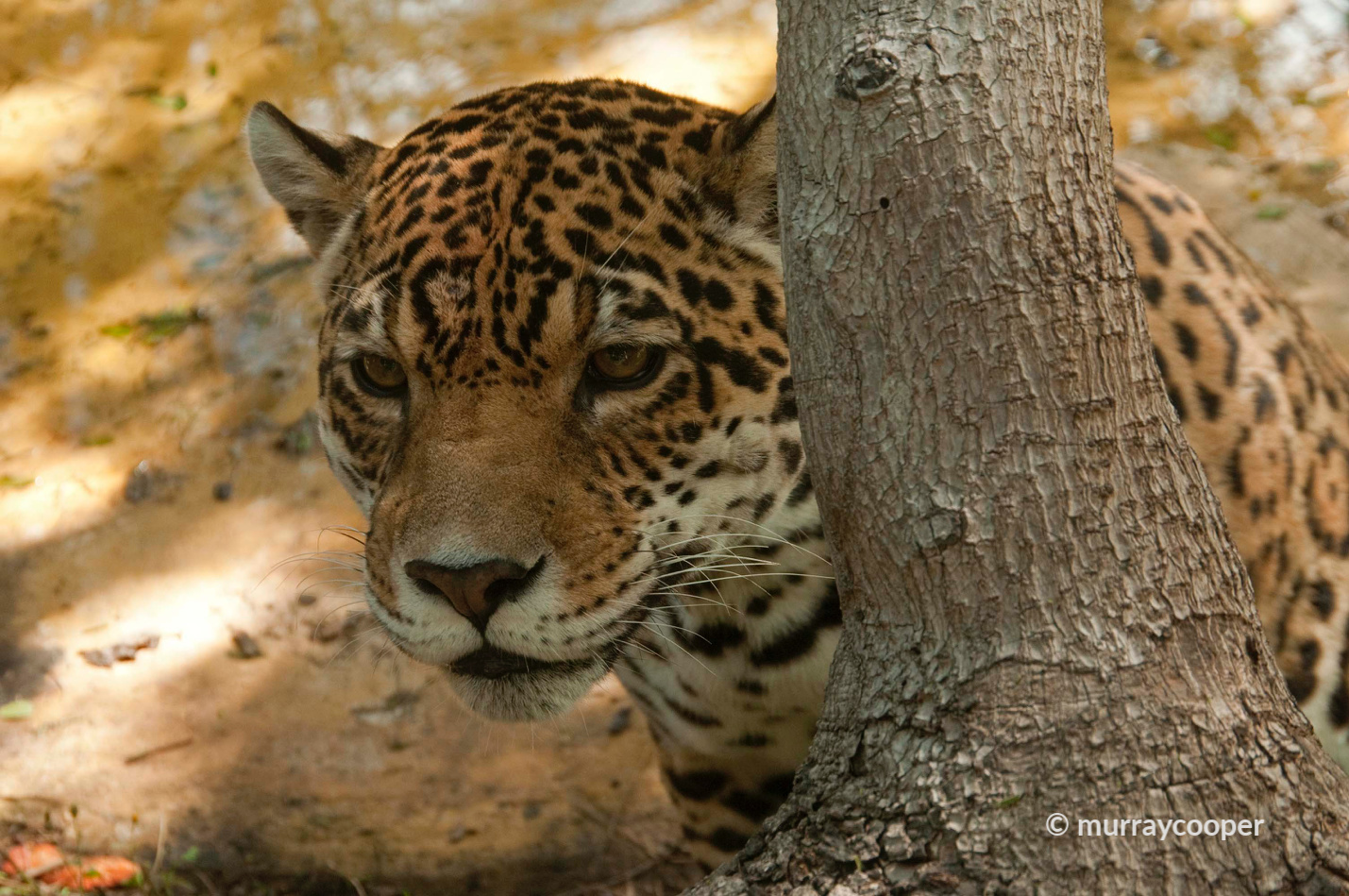 Welcome to the Ecuador Endangered campaign!

For five years, the Rainforest Information Centre and our Australian and international allies have been supporting rural and Indigenous communities to resist grand-scale copper and gold mining in some of the world's most biodiverse regions.

In October 2017 it was found that around a third of Ecuador's land mass has been sold to international and overseas mining companies for copper and gold exploration - without the consent of the public. Over two million hectares of this land includes legally protected forests and Indigenous territories.

This is a human rights and environmental catastrophe in the making. If even some of these mining projects go ahead, thousands of endangered species risk extinction.

To get a visceral feel of the size of the situation and the landscapes, biodiversity and communities who are being impacted, watch this trailer for a documentary film which is currently being created by our partners at the "Marrow of the Mountain" project. 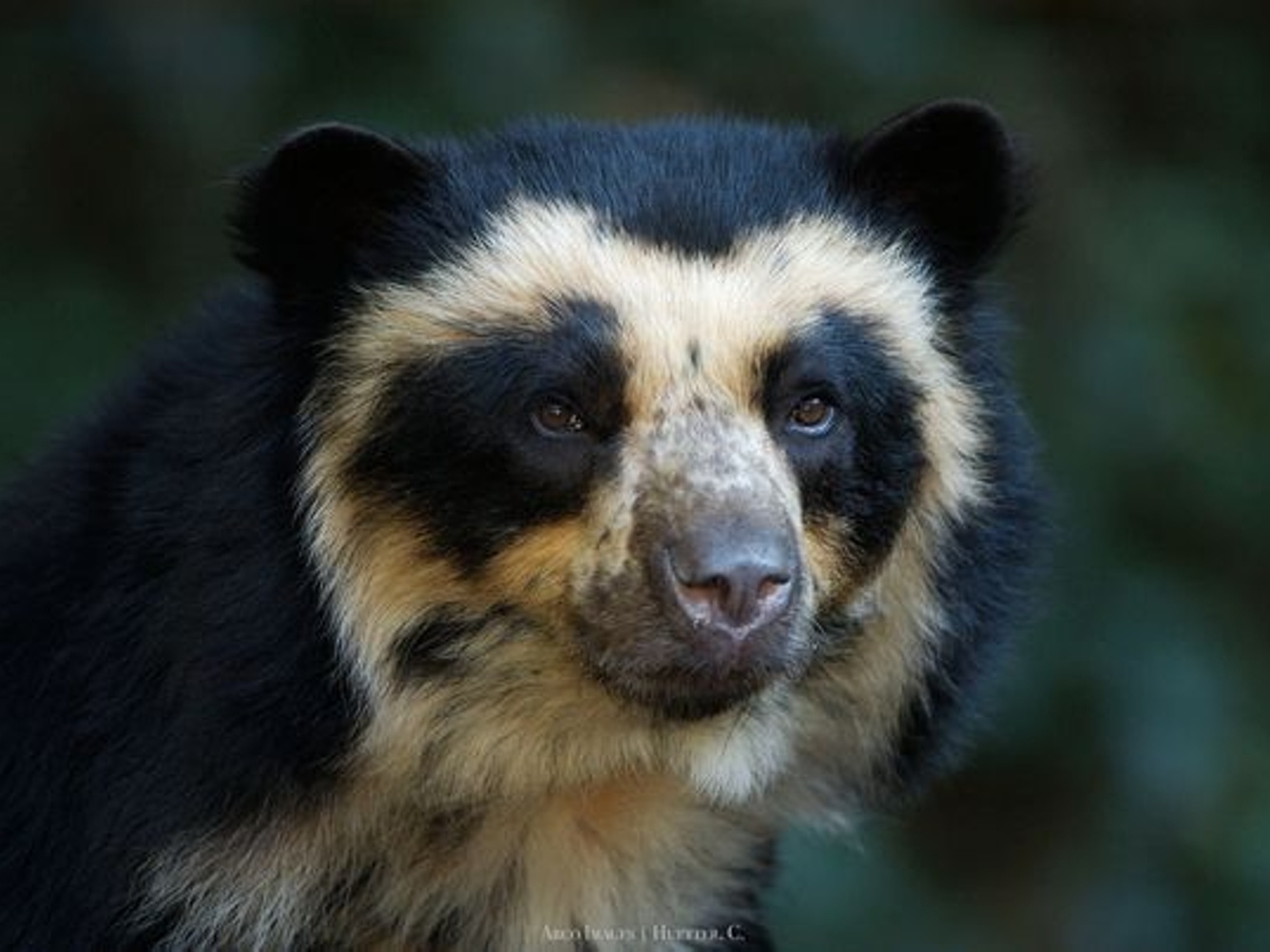 Through our campaign, we have raised and sent over $80,000 to Ecuador's frontlines who are defending their communities, waterways, mega-biodiverse ecosystems and human rights against this onslaught of extraction and greed.

Campaign volunteers have also conducted research, written reports and media articles, disseminated information about mining companies to those on the ground so they can be better informed, and done direct actions at mining company headquarters and investment forums in Australia.

As of 2022 the fight continues, as mining companies push their way in all over the country trying to secure their investments. Hence our campaign continues to run strong, and we are still welcoming support on all levels. 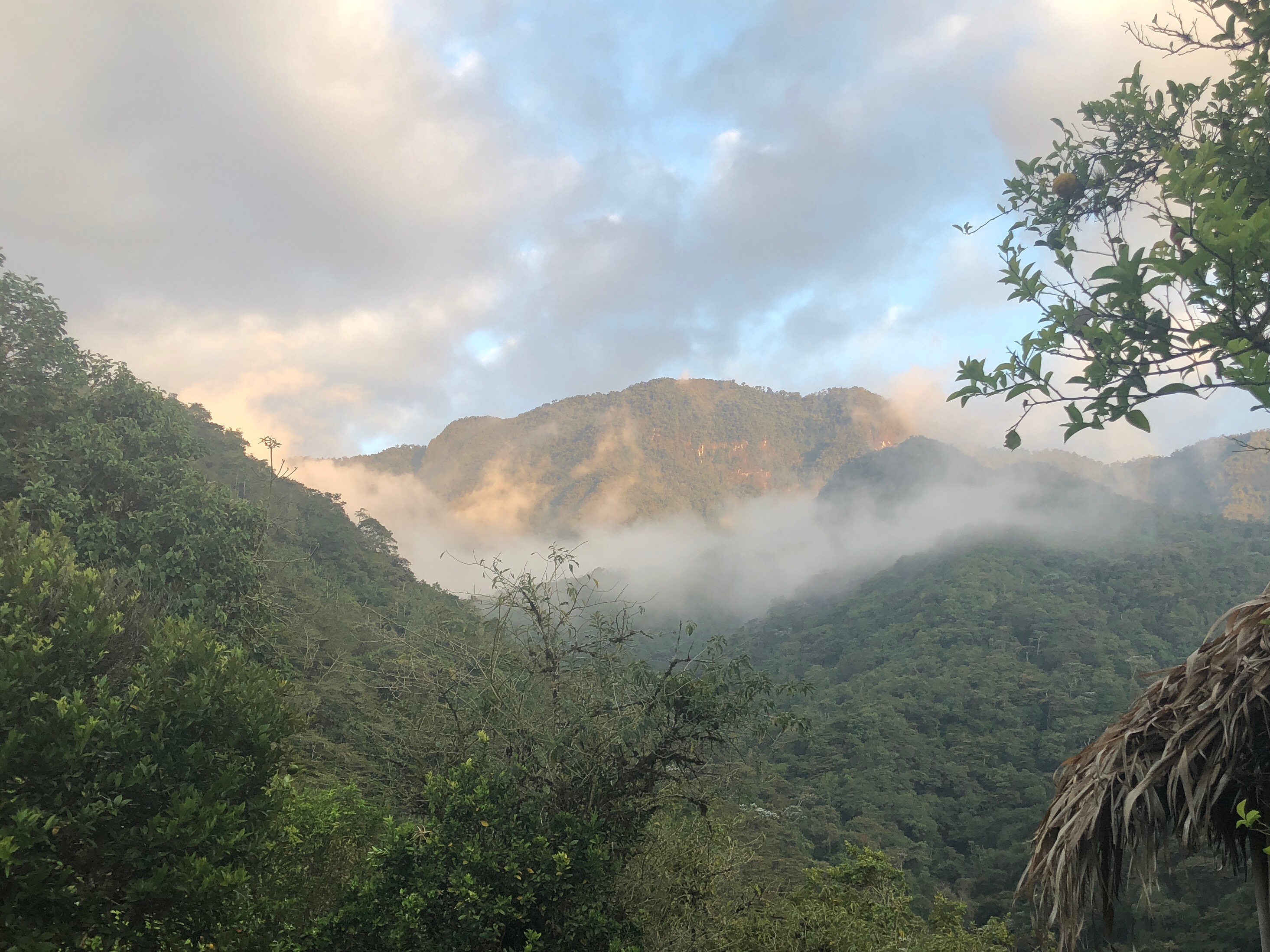 RIC is mainly working with communities in the northwestern part of the country, where Australian companies such as BHP, SolGold and Hanrine (Hancock Prospecting) threaten mega-biodiverse forests, farming communities, water-source areas and the lands of the Awá Indigenous people.

For more information about the damage that grand-scale mining will do to biodiversity and ecosystem services across Ecuador, read this 2018 research paper published in the Journal of Tropical Conservation.

For an overview of Australian involvement in this catastrophe, read: Australian mining companies plunder Ecuador's gold and copper 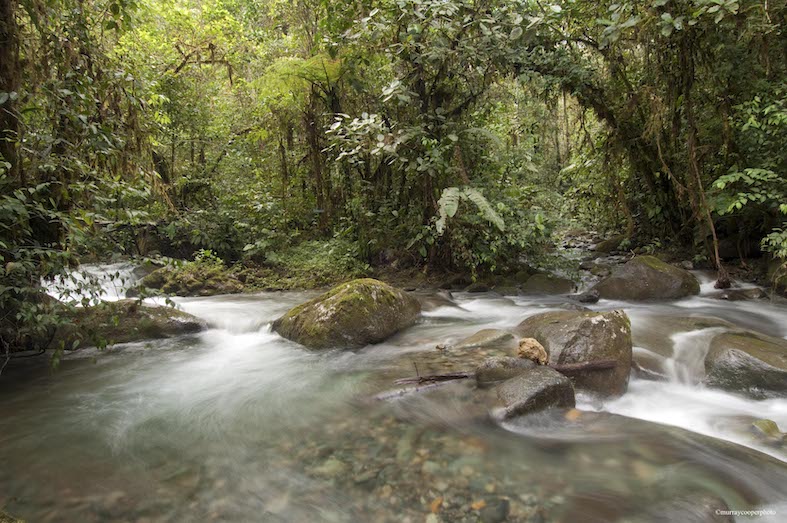 2021 ended on a high note when Ecuador's Constitutional Court decided in favour of protection for the world acclaimed Los Cedros Biological Reserve - a spectacular and ethereal cloud forest in the country's Chocó biodiversity region, of which only remnants are left.

The court ruling was a world first for forests under threat of major extractive industries. Seven out of nine judges chose to uphold Ecuador's unique Rights of Nature constitutional laws, as well as to protect four major waterways and the rights of local communities to a clean and safe environment. As a result of the ruling, two mining companies - Cornerstone Capital resources (Canada) and ENAMI (Ecuador) lost their environmental licences to operate within the reserve.

The decision cannot be appealed. Most importantly, this ruling sets a legal precedent for over 2 million hectares of protected forests across Ecuador. Other legislative implications will complicate things for mining companies who have until now been given free rein to hold a massive copper investors' party over one third of the country's land mass.

This  win would not have been possible without the hundreds of people who donated to help the Rainforest Information Centre cover the legal fees for the case - so a big thank you from the campaign team and all species who call the reserve home! 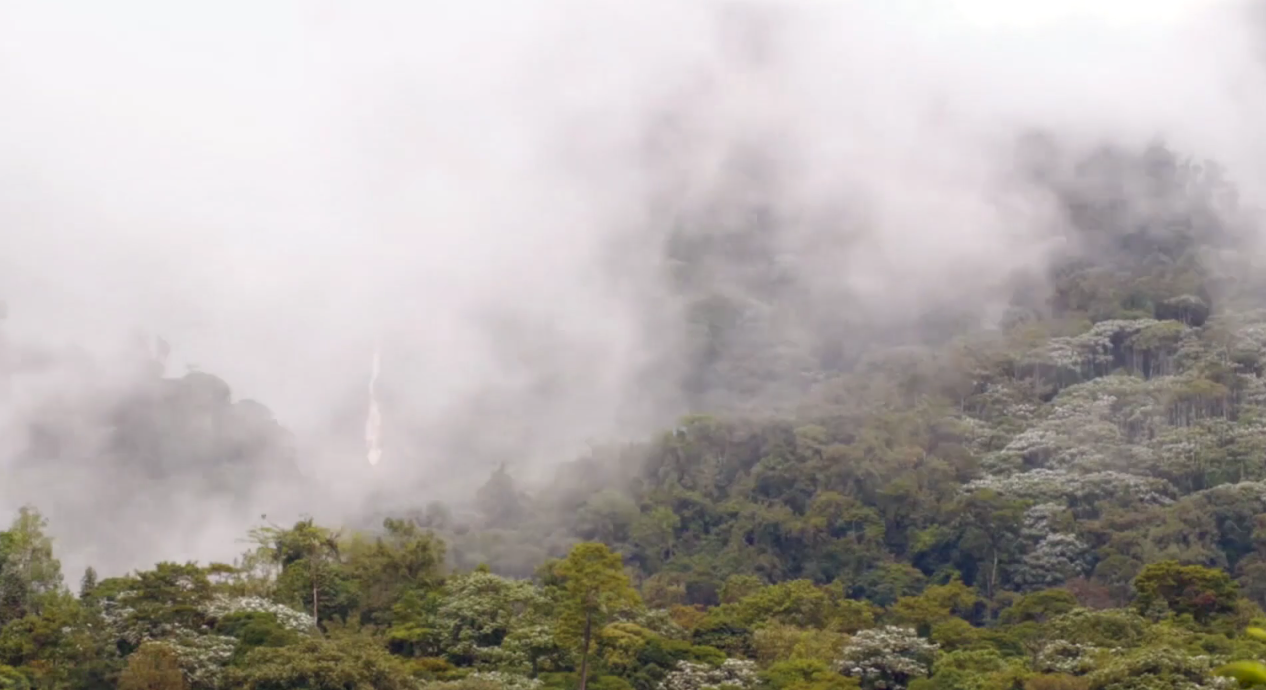 In this 5-minute video John Seed, founder of the Rainforest Information Centre, explains what is special about Los Cedros and why we've fought so hard to protect it.

Visit the Los Cedros webpage to learn more about the reserve's history, contact details and how to visit.

Visit our campaign website to learn about the incredible natural history of the reserve, including taxonomy lists and photos of birds, reptiles, amphibians and insects.

List of Publications from research undertaken at Los Cedros 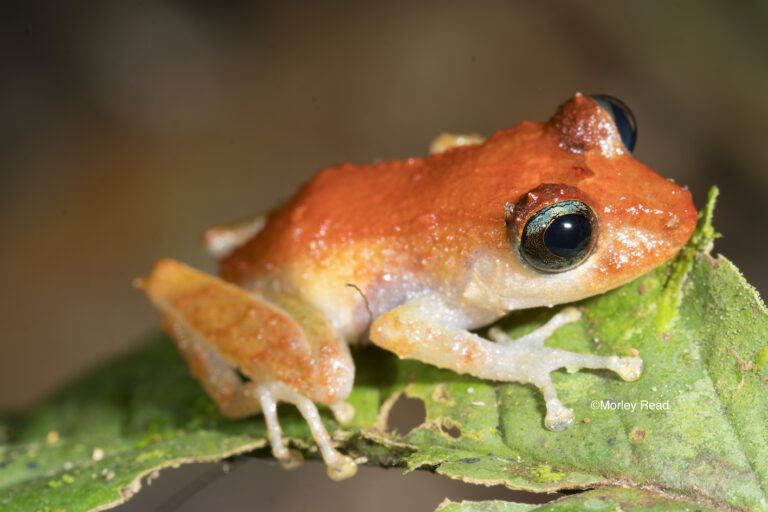 What's next for the campaign?

The Los Cedros precedent has been a huge boost to anti-mining and conservation efforts across Ecuador.

But we still have a lot of work to do in supporting other frontlines with advocacy, funds and resources, and letting the world know that it's not okay to plunder one of the world's most biodiverse countries for profit.

Over 2022-23 we are continuing to support the team at Los Cedros Reserve to set up legal and governance structures so this irreplaceable ecosystem can be protected for future generations of all species.

In addition, we continue to provide advocacy and emergency funds for several other communities in northwestern Ecuador, who are using the Los Cedros precedent to mobilise and lodge legal cases to defend their forests, waterways and livelihoods.

Just north of Los Cedros, the Intag Valley and surrounding cloud forests are part of the same global biodiversity hotspot, with hundreds of endemic and endangered species. Unfortunately the region is covered in mining concessions - several of them owned by Australian companies including BHP, SolGold and Hancock Prospecting (Hanrine).

Watch this video showcasing the amazing biodiversity of the Intag region,  narrated by John Seed. 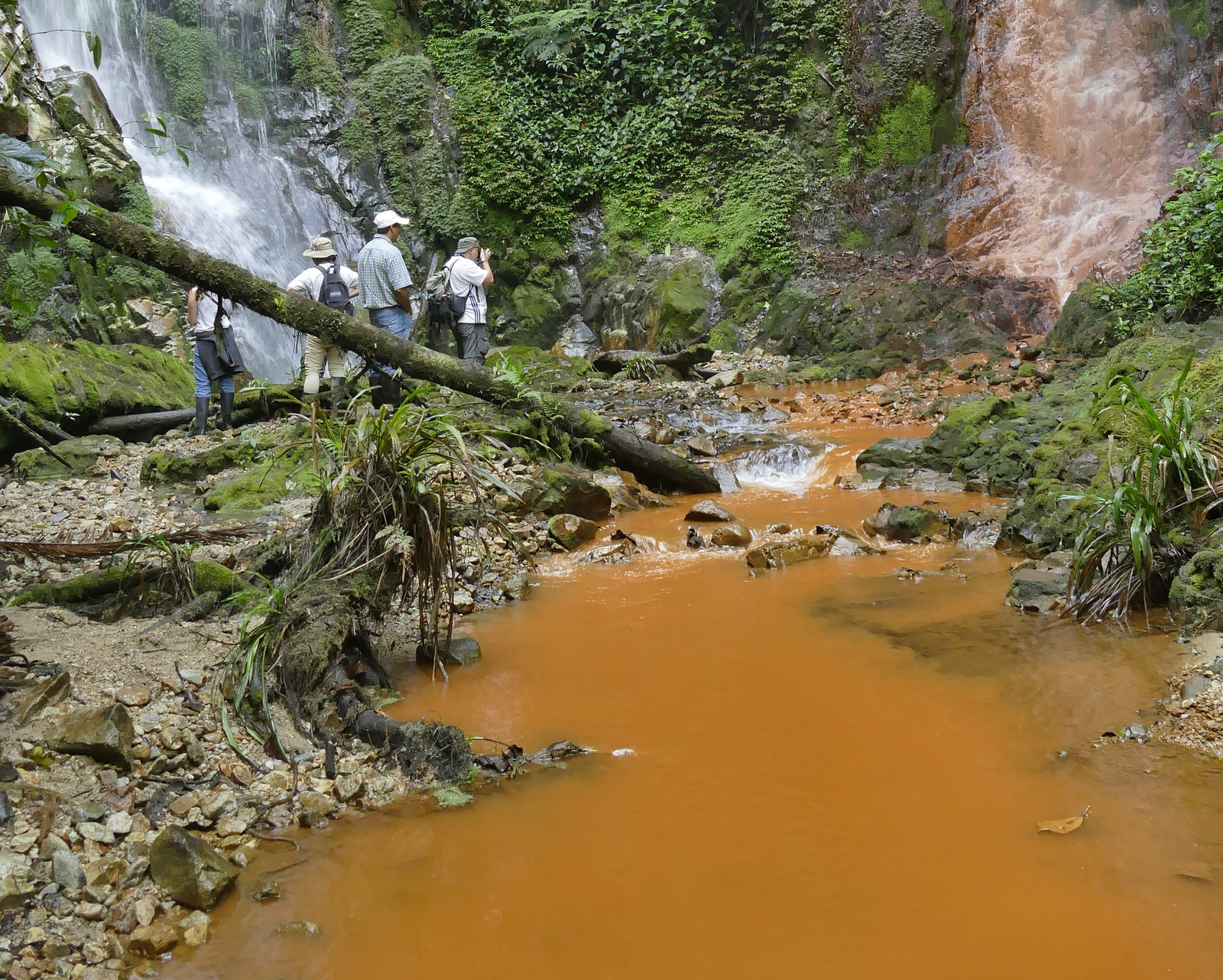 We are continuing to assist community resistance against the entry and destructive activities of mining companies in Intag and other areas of northwestern Ecuador.

We have helped fund several regional assemblies, leading to a resolution among Intag residents for the region to be declared a Mining Free Zone - a Sanctuary of Life. This motion is now enshrined in local legal ordinances.

We are currently helping to support legal cases in other parts of Ecuador which will challenge illegally-awarded concessions on the basis of lack of prior consultation and violations of constitutional rights, as well as specific actions by companies which have resulted in violence and human rights abuses against people who don't want mining in their lands.

Plaintiffs intend to use precedents set by the Los Cedros ruling pertaining to the rights of water, and the human rights to a clean and healthy environment. More details about these cases, and how to support, will be published once they are scheduled in court - at the moment communities are keeping a low profile so as to not alert mining companies and corrupt officials. 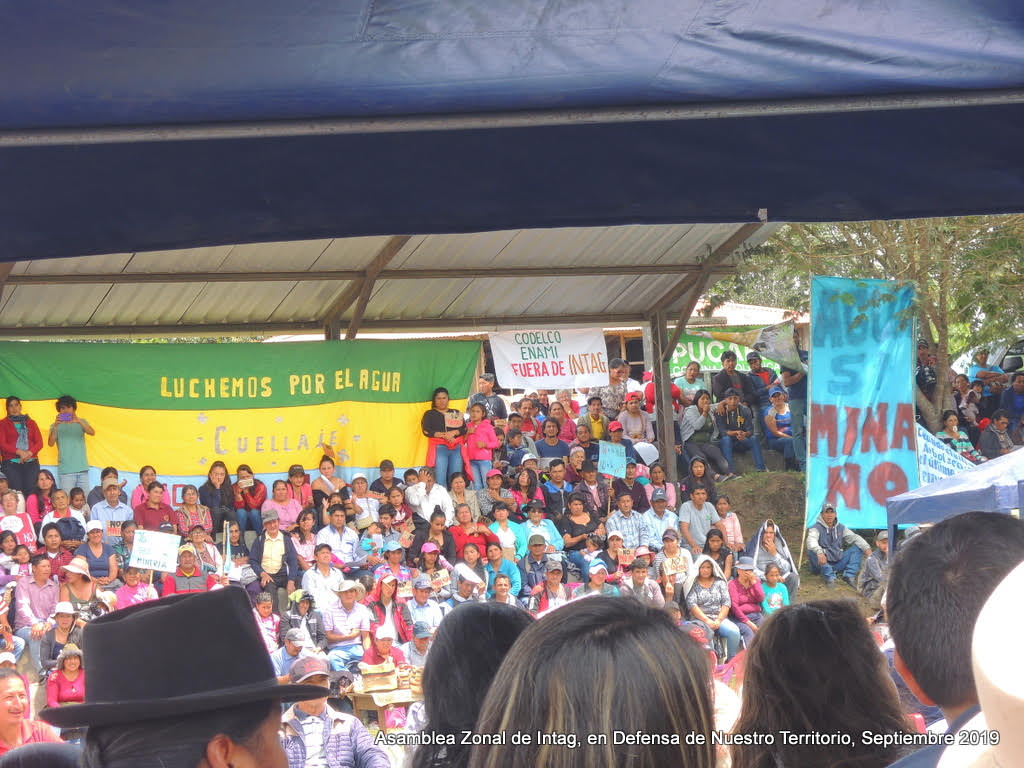 In 2021, we collaborated with international alliance Yes to Life No to Mining, to put the serious mining situation in Ecuador on the global map with regard to the push for copper for the "Green Energy" revolution. Mining companies - especially Australian - are greenwashing their environmental and human rights abuses in Ecuador in terms of needing to mine critical minerals for net zero.

This report published by two of our campaigners details violent scenes in the small town of Buenos Aires, where the company Hanrine (owned by Australia's richest person, Gina Rinehart) forced its way into the community.

In November we ran a workshop at the COP26 People's Conference, bringing frontline speakers from Ecuador to join mining activists from other parts of the global north and south impacted by Australian mining companies. 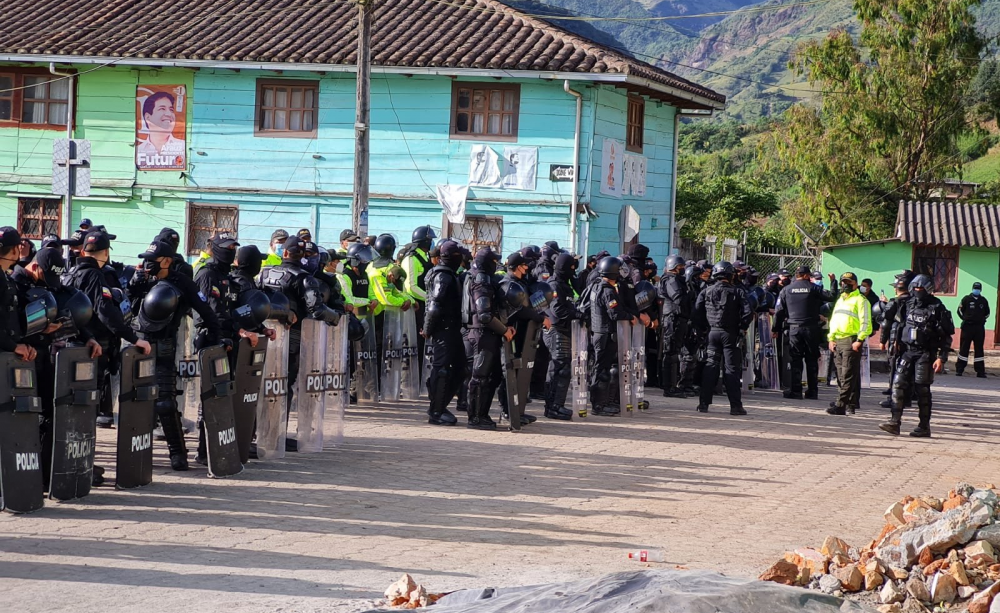 Police line up to violently evict protestors in the town of Buenos Aires, August 2021. Hundreds of community members were peacefully blocking the road to prevent entry of personnel from mining company Hanrine. Image courtesy of BUPROE.

Visit here for more information, including news, media releases, reports and interactive maps, produced by our amazing volunteers at the Melbourne Rainforest Action Group (MRAG), who have driven the Ecuador Endangered campaign from its beginning.

MRAG has a focus on the Australian mining companies plundering Ecuador, and works to build solidarity in Australia as well as supporting frontlines in Ecuador.

Would love to help? We sometimes need volunteers for the following things:

- English to Spanish, and Spanish to English translation of documents

- Specialised skills such as GIS/KML mapping 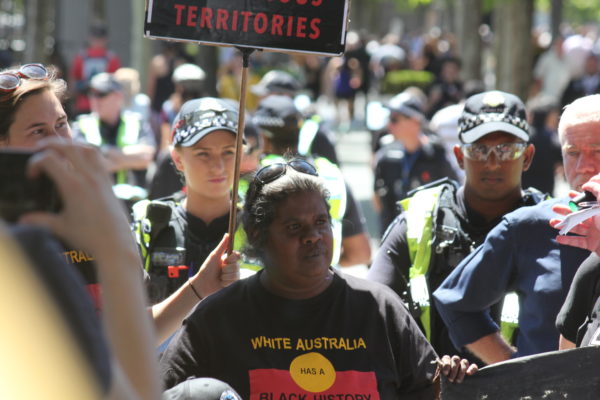 It was an intense beginning to 2020 for front-liners protecting rainforests and communities in northwestern Ecuador.

BHP, the world's biggest mining company, proved they were willing to do almost anything to get into communities to start their drilling - including lying, cheating and surrounding themselves with military police.

RIC helped to fund numerous community assemblies, which resulted in a legal document containing resolutions to be presented to governmental, human rights and environmental bodies.

See also our report in The Ecologist: here 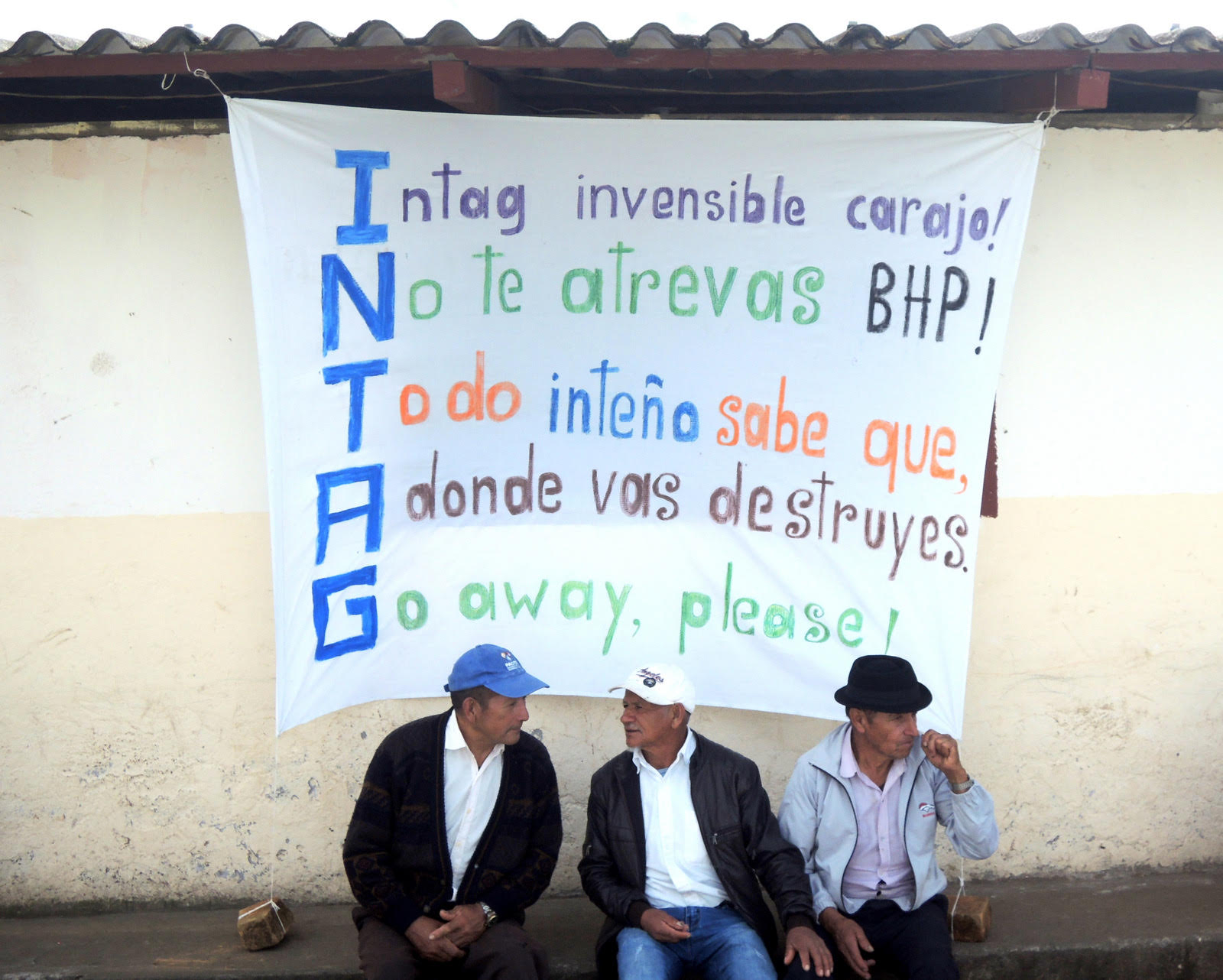 Resisting BHP in the community of Cazarpamba, 2020. Image: Carlos Zorrilla

August 2019: RIC contributed to initial production costs for a major environmental documentary, Marrow of the Mountain (See trailer here). This film is being produced by friend of John Seed, mycologist and campaign supporter Roo Vandegrift. It will focus on Los Cedros and other critically endangered forests in the northwestern Andes of Ecuador. RIC is now a partner of the film and will continue to support its completion.

September 2019: Along with our allies at Mining Watch Canada, RIC donated funds to make a national anti-mining convergence happen in Quito. Our money mainly went to catering and travel for indigenous leaders from the Amazon and people dwelling in the vulnerable high plains ecosystems, all under mining concession. At the meeting we presented an overview of Australian mining company involvement in Ecuador.

Also in September we helped fund an assembly of 1500 people from communities across the Intag province.

Also in September MRAG got its first ever national news coverage in Australia, with an SBS story about Gina Rinehart's mining debacle in Intag

In October Ecuador erupted in nationwide protests and strikes over austerity measures imposed by the government as part of a new IMF deal.

In October RIC donated funds (mainly from a couple of generous donors) to support the ongoing legal action to stop a gold mine destroying cloud forests at Junín, Intag. RIC also supported Los Cedros Reserve to present a legal action to the Constitutional Court, as mining companies continued to refuse to honour the April provincial court ruling and leave Los Cedros.

In October and November MRAG targeted the AGMs of SolGold and BHP in Brisbane and Sydney respectively, to present the concerns of embattled Ecuadorians to shareholders.

In December RIC members ran a deep ecology workshop in Melbourne and fundraised $2000 for Ecuador. More workshops followed in Feb and March in Tassie, and May in Melbourne. 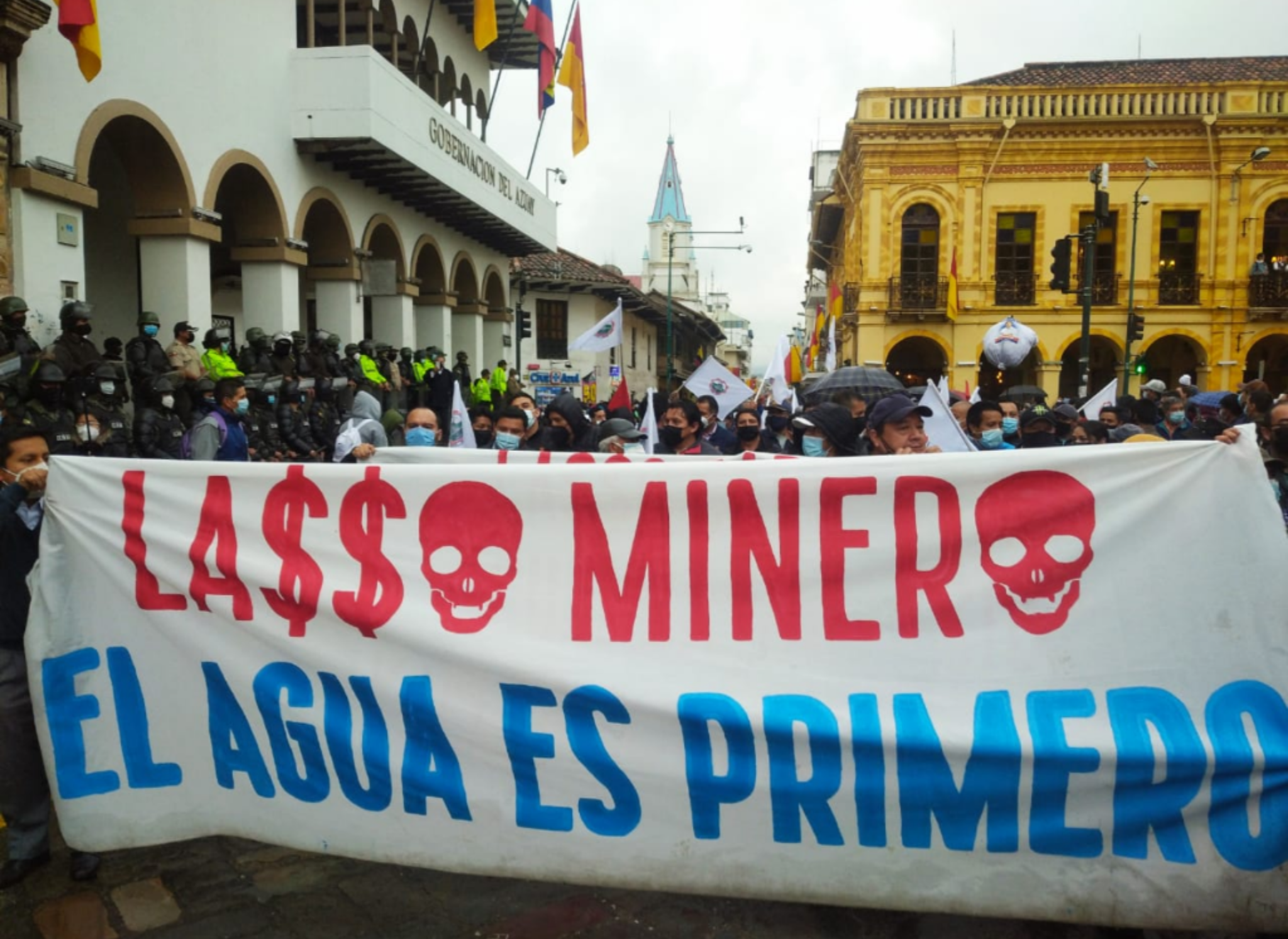 A new wave of nationwide protests against newly incumbent president of Ecuador, Guillermo Lasso, in 2021. Lasso was responsible for signing executive orders to quickly expand the mining roll-out across the country in conjunction with austerity measures, to pay huge debts to the International Monetary Fund.

VISIT US ON SOCIAL MEDIA

Summary of tax and legal deregulations for mining made during Correa administration (Carlos Zorrilla, 2017) (pdf) 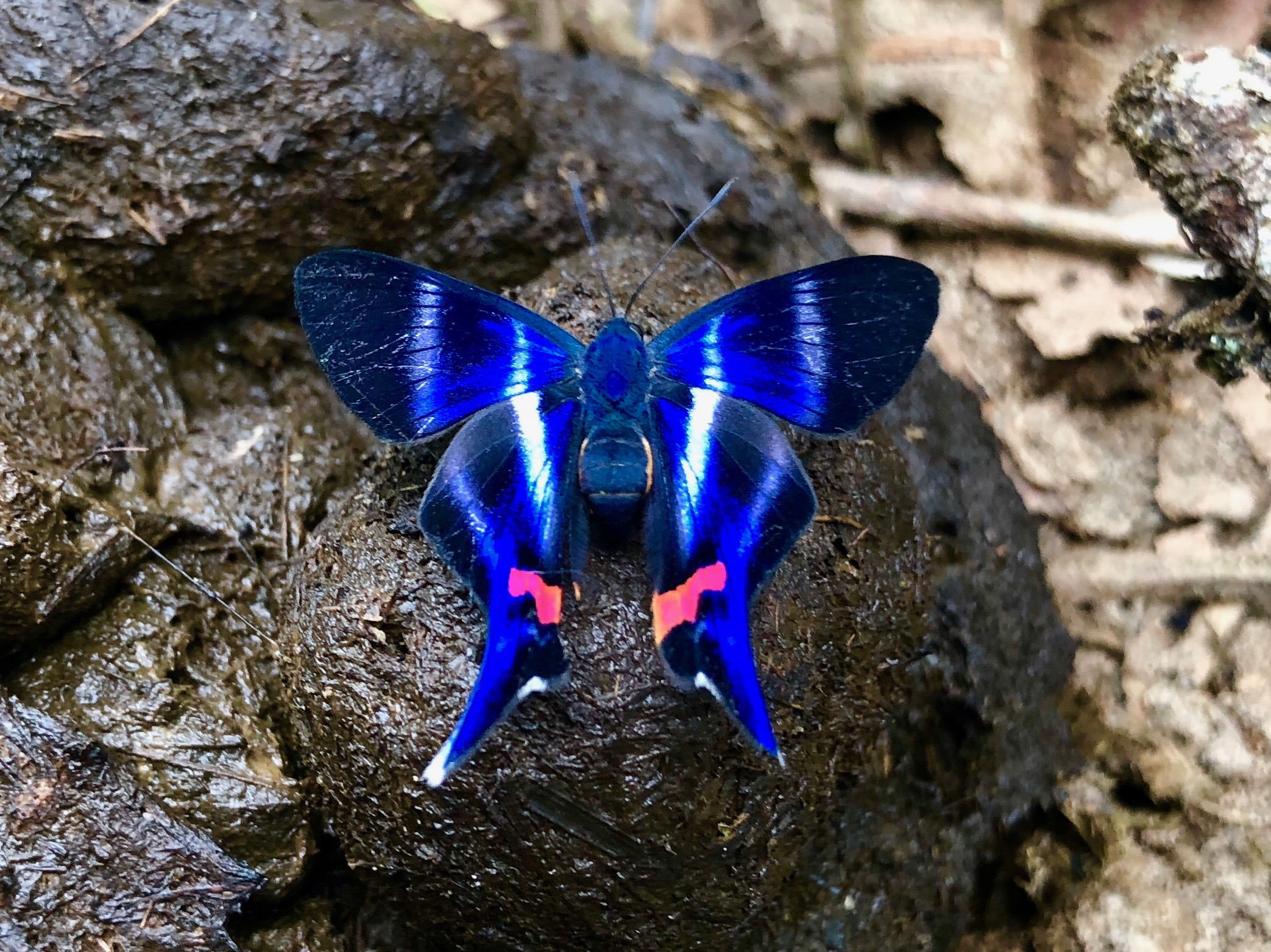