Save Los Cedros from Mining

Situated in the northern Andes of Ecuador, the Los Cedros Biological Reserve is one of the most biologically diverse and endemic habitats on Planet Earth.

But it is threatened by mining explorations, mainly for copper.

Summary: Los Cedros sits within a mining concession belonging to a Canadian company, Cornerstone Capital Resources. This concession was secretly handed out in 2017 by the Ecuadorian Government, along with other concessions covering over two million hectares of protected forests and indigenous lands across Ecuador.

In 2019 local environmental protection groups won a legal case for protection of the reserve at the Imbabura Provincial Court. The court ruled the immediate revoking of Cornerstone's exploration license, essentially kicking the company out

Photo: demonstration in support of Los Cedros outside the courthouse, Ibarra, April 2019. Courtesy of OMASNE. 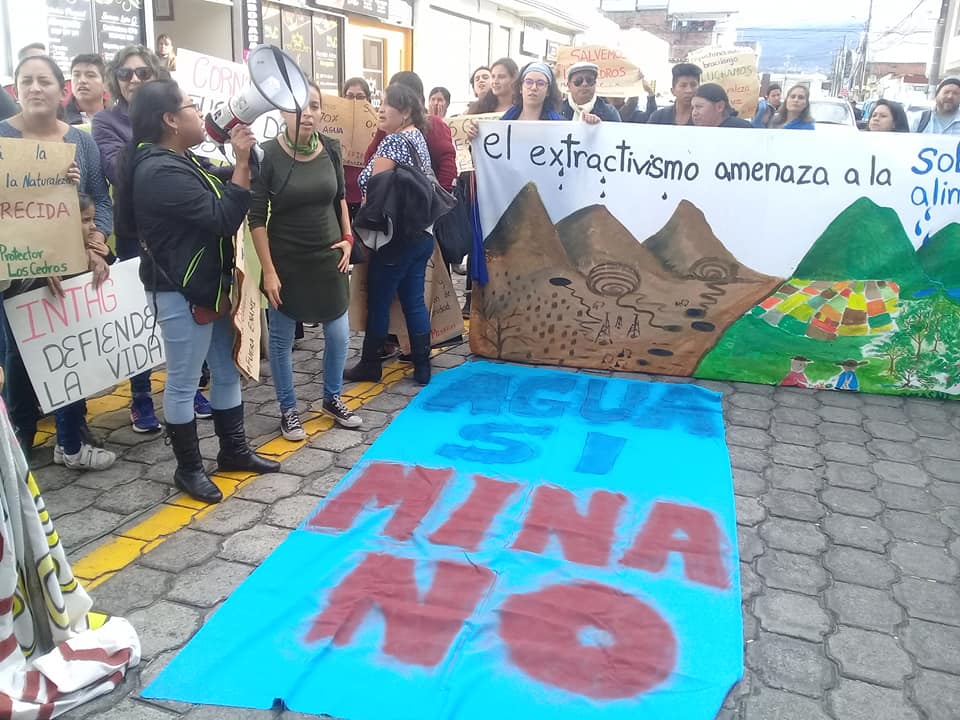 However, Cornerstone immediately appealed the ruling. While the appeal is in progress, the company has refused to obey the ruling and continues to station workers in the reserve.

In February 2020, the company announced its intention to start mineral sampling in Los Cedros. This will involve drilling and roads being built in the reserve.

The Ministry of Environment and Mines has appealed to the Constitutional Court for protection from the Provincial Court ruling ordering the cancelation of the licence to prospect in the Magdalena 1 & 2 concessions, which include Los Cedros.   The Constitutional Court has ordered the Provincial to clarify the license annulment. Government ministries, the Chamber of Commerce and Chamber of Mines are pressuring the court to reverse the licence decision.

The Ecuadorian Government is under tremendous economic pressure to push mining projects through, and this will only increase once the country comes out of lockdown due to the Covid-19 pandemic.

We have to keep supporting local forest defenders and fighting for Los Cedros and all Ecuador's biodiverse areas under threat from mining. These are dire economic times globally, but to lose sight of these irreplaceable forests is to help usher in an even greater catastrophe: a climate and ecological emergency which may result in the collapse of earth's life support systems.

Our campaign to save Los Cedros is part of an international campaign supporting local communities and environmental groups to resist mega-mining projects in other protected forest reserves across the country.

For regular updates about this international campaign, see our Ecuador Endangered page.

See also the page of our active Australian campaign group, the Rainforest Action Group, which focuses on Australian companies who are mining in Ecuador.

To support the defenders of Los Cedros, donate to our Ecuador Endangered crowdfund.

Los Cedros Biological Reserve consists of 17,000 acres of premontane wet tropical and cloud forest in Northwestern Ecuador.  Of this, 2,650 acres is formerly colonized (now reforested) land, while the remainder is primary forest. The reserve is a southern buffer zone for the 450,000 acre Cotocachi-Cayapas Ecological Reserve and both are part of the Choco Phytogeographical Zone.

Researchers are still finding new and undescribed species yearly in Los Cedros – most recently a new species of frog discovered in the reserve named Pristimantis mutabilis which is the first reptile which can change the texture of its skin back and forth from all warts to slippery smooth in minutes. A new phenomenon to science.

A dedicated group of forest activists, lead by reserve creator Jose DeCoux, has managed and protected the Los Cedros Biological Reserve for the last 29 years and counting.

This biodiversity gem would have long ago succumbed to deforestation, pastures, cows and corn if it weren't for the continued presence of this team. The constant search for new arable land for subsistence agriculture and illegal logging would have turned this rich and magical forest ecosystem to a simple pasture.

See a letter signed by 23 international scientists who have studied and worked at Los Cedros which attests that “the value of the Los Cedros Ecosystem is far greater than any possible mineral wealth that lies beneath it. This area should not have been placed in a mining concession and should remain a protected area.”

Watch a video by permaculture consultant, Geoff Lawton, that explains the urgency to save Los Cedros from destruction.

It is known that there are over 297 species of birds in the reserve.

Tanagers, Hawks, Eagles, Parrots, Owls, and Toucans to name but a few. Over a dozen species of hummingbirds whizz around throughout the forest, some only an inch long. The stunning Andean Cock-of-the-Rock, the Toucan Barbett, and the colourful Golden Headed Quetzal make their home here.

Encompassing thousands of species, the invertebrates dominate the faunal biomass. In Los Cedros there are over 900 species of nocturnal moths most with amazing wing patterns and colours. There are also thousands of species of butterflies, ants, beetles, spiders, and bees. Often seen is the Pepsis Wasp (Hercules Wasp), and it may be dragging a tarantula home to serve as a living nest for its young. The largest cockroach in the world lives here, along with the first aquatic cockroach found in South America . The reserve is also home to several species each of snakes, lizards and frogs which are often seen but have been little researched.

Evidence in the form of scat, tracks, cameras and the occasional sighting provide the assurance that five species of felines roam their territories here in the reserve. Common names are the Jaguarundi, Margay, Oncilla, Puma, and Ocelot. In the morning, along with the chorus of birds, you are likely to be woken by the Mantled Howler Monkey. He is the loudest, so can often be heard, and sometimes seen, in the canopy. The two other primates are the White-Throated Capuchins and the rare Brown-Headed Spider Monkey. The only species of South American bear, the Spectacled Bear, inhabits the higher elevations of the reserve and is seen on occasion. Other mammals include the Opossum, Nine-Banded Armadillo, Kinkajou, Tayra, Neotropical Otter, Collared Peccary, Red Brocket Deer, Paca, Agouti, Spiny Pocket Mouse, Quichua Porcupine, Western Dwarf Squirrel, and Red-Tailed Squirrel.

Abundant tree species include Copal, Madrono, Avocatillo, Strangler Fig and the Cedars that give the reserve its name. One hundred and eight tree species  have been identified, but this represents only a small fraction of the diversity present in the area; it has been estimated that there are 299 tree species per hectare at Los Cedros. The dense forest floor and understory is a thick web of buttress roots, lianas, vines, prop roots, drop roots, and decomposing plant material. Characteristic of a cloud forest, the trees on the ridge lines are more stunted in size and laden with masses of luxuriant ephiphytes, with a more open canopy allowing a thicker and richer understory.

Also strong through the upper story are climbing philodendrons, bromeliads, heliconia, and cyclanthaceae. The area is especially rich in Orchidaceae, with 156 species identified, with a predicted (by Cal Dodson) 250 yet to be discovered.

WHY DO WE NEED YOUR HELP?

The Ecuadorian government has stepped in with an ill-conceived and poorly executed update to the management plan for the reserve. Since the reserve’s inception, the staff has worked hard to build trust and communication with the local community through workshops and education and jobs in the reserve.  Our boundaries have been carefully managed with dedicated neighbours of the reserve, creating allies in the protection and management of this biodiversity hotspot.

Now it appears that the only thing the government is interested in is making it as easy as possible for mining companies to step in and start drilling.

We fear for what could happen, for the magic we could lose, the forest that we love, the project we have built for the last quarter of a century.

In 2017 the Ecuadorian Government secretly sold off not only Los Cedros, but approximately 2 million hectares of the world's most biodiverse protected forests to international mining companies. If the world lets these companies in, they will destroy the most biologically diverse habitats on Planet Earth.

This is unacceptable at the best of times, but even more so in a global climate and ecological emergency. We can't sit by and let this happen. These forests moderate the world's rainfall patterns, supply water to the rivers that run into the Amazon basin, and are homes for countless endemic and endangered species.

WHAT DO WE NEED?

We currently have a Save Ecuador Rainforests From Mining Campaign running on our Crowdfunding Website: Fund My Planet.

The Ecuadorian forest activists are in financial struggle and funds are sorely needed for legal assistance against Cornerstone and other mining companies who are aggressively pushing into concessions across the country, including several Australian giants like BHP, SolGold, Fortescue Metals and Hanrine. These are the kinds of expenses that are incredibly hard to raise for a small, grassroots NGO. At the moment we are supporting 3 legal funds, including the Los Cedros case.

Also regarding Los Cedros, we need ongoing funds to maintain all that we have built to house volunteers, researchers and tourists that are the backbone of the monthly support for the reserve’s management.

This campaign can make a huge difference in the future of neotropical biodiversity conservation.

All donations are tax-deductible for Aussies!