CoCo the Cassowary WAS a proud father of 3

Send your condolences by understanding his plight 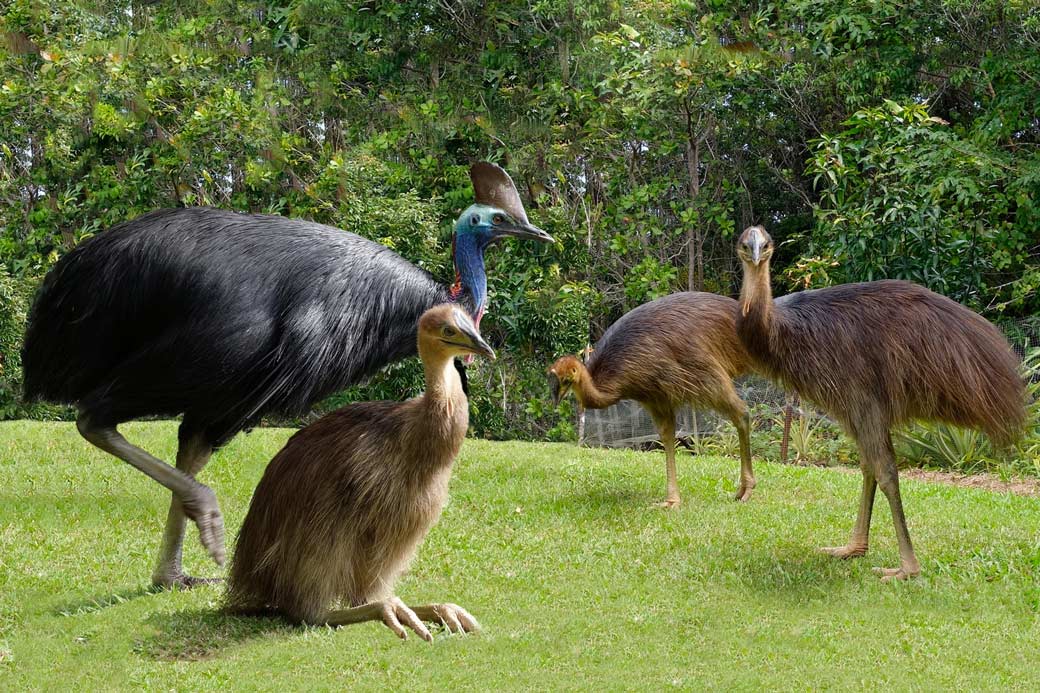 Against many odds that threaten the survival of cassowaries, CoCo had reared his young for 18 months, an age that they were almost independent. CoCo’s family were much-loved residents of Diwan in the Daintree Rainforest, Australia.

We hardly dare to imagine the horrific chase, likely at night by a pack of pig hunting dogs that tore his family apart, killing all three of his chicks. (Warning: graphic images of dead chicks here)

Cassowaries are an endangered species that have the right to safely live and raise their young in this World Heritage Area. Dog attack is one of the top 3 threats to cassowary survival yet most attacks must occur out-of-sight and therefore remain unaccounted for.  Please add your name to safeguard cassowaries in this critical habitat.

1) Strengthen [A] existing dog ownership laws and increase awareness [B], enforcement [C] and penalties [D] north of the Daintree river.

3) Prohibit professional and recreational pig-hunting with dogs [H] north of the Daintree river.

4) Implement long-term strategies for 'dog free' conservation zone precincts in the Daintree with a grandfather clause for exiting dogs[i].

411 SIGNATURES
100 signatures
The Daintree rainforest in north Queensland is considered one of the oldest on earth, representing an estimated 415 million years of evolution and is a global hotspot for biodiversity[1].The endangered southern cassowary is an outstanding universal value of this World Heritage Area. It plays an integral ecological role as a rainforest regenerator by eating the fruits and dispersing the seeds of hundreds of native plant species[2]. This iconic bird is undeniably the jewel of the Daintree, which is itself the crown and tourism mecca of the Douglas Shire.

Lowland rainforests support the highest density of cassowaries [3] yet up to 80% of these have been cleared across the Wet Tropics [4]. The Daintree lowlands remain relatively intact and are one of only six priority cassowary management areas [5] comprising of 27,691 ha of identified critical habitat [6]. Even here, in one of their last strongholds, cassowaries are still at risk from 3 persistent threats; habitat loss, vehicle strike and dog attack [7,8,9]. The region’s relative geographical isolation by two major river systems and a high-forested mountain range gifts it the potential of being an ‘island-like’ sanctuary onto which threats may be more easily managed, reduced and/or excluded.

A unique opportunity exists to strengthen protection for the cassowaries of the Daintree with Douglas Shire Council’s Mayor Ms Julia Leu appointed as cassowary ambassador of the year, concurrent to a local law review. Help demonstrate your support for action here.

Dogs and cats are predatory animals that attack and kill protected native species and, when unrestrained, one of the biggest threats to our wildlife [10]. While many dog attacks likely occur out-of-sight and remain unaccounted for the Federal Governments’ Environment Protection Biodiversity Conservation Act 1999 the Cassowary Recovery Plan and the Queensland Nature Conservation Act, 1992 identifies this as a significant impact and threatening process to cassowary survival. Of 110 known cassowary deaths in Mission Beach between 1986-2004, dog attack was second only to vehicle strikes as the leading cause of death [11].

Various legislation exists to protect animals (and people) from dog attack but these often lack the enforcement required for effective compliance. They also fall short in protecting native species, often relying on the owner being responsible and in-control of their pet, which is not the case with dogs wandering at large and rarely likely with hunting dogs. These laws are ineffective at reducing wildlife deaths and it can be assumed many such attacks go un-noticed, lack witnesses and/or sufficient evidence for prosecution.

There are three species of dogs in Australia, that being; domestic dog, dingo and hybrid domestic-dingo each having their own management issues in relation to wildlife protection. Many large domestic dogs have been witnessed wandering at large in the Daintree with camera traps photographing domestic and collared pig-hunting dogs within dog prohibition areas of National Park, Nature Refuge and Conservation Reserve boundaries [12].

Recorded incidents of dog attacks on cassowaries are often fatal and it estimated that these records, being reliant on someone witnessing the attack or discovering a body, are only a small proportion of a much larger, undocumented occurrence. To give example of the problem of dog aggression in the human community, the number of dog attacks on humans in Queensland alone was estimated to be a staggering 31,000 over 11 years between 1999-2010 [13].

Dogs are territorial by nature, their barking and scent influences the feeding, movements and general behavior of the cassowaries which further reduces habitat availability. Whilst the issues surrounding wild dog management is complicated and dealt with by government agencies, the impacts of domestic dogs in an environmentally sensitive area can be reduced with public co-operation by way of responsible dog ownership and political will.

For wildlife under threat of extinction, such as the cassowary, the precautionary principle must be applied.  The principle recognizes that delaying action until there is compelling evidence of harm will often mean that it is then too costly or too difficult to avert the threat [14]. In this case, the precautions have vast potential benefits for cassowaries and other endangered fauna whilst requiring relatively minor lifestyle alterations for the human community of the area.