The extent of recent mining concessions in Ecuador

A report detailing the overlap of exploratory mining concessions with protected forests and other regions of conservation and human rights interest in Ecuador.

Below: Text of report only. To download a full PDF version including maps and figures, click here.

Throughout 2016 and 2017, the Ecuadorian government announced concessions to over 2.9 million hectares (7.17 million acres) of land for mining exploration. Many of these exploratory concessions are in previously protected forests and indigenous territories, as well in headwater ecosystems and biodiversity hotspots of global importance. Additionally, many of these concessions appear to be in violation of Ecuadorian law and international treaties. Here, we analyze the extent of exploratory mining concessions in Ecuador, examining the way that such concessions overlap with protected areas, indigenous territories, and forest types of conservation interest.

Recent history in Ecuador has been heavily influenced by the use of extractive industry as a means of economic development for the country. Since the 1990s, the government has sought to further open the country to min- ing through the liberal granting of mineral concessions. In many cases, such concessions have overlapped with protected areas, the headwaters of rivers, and indigenous territories; in 2008 a ‘mining mandate’ was issued to revoke these concessions because they violated the country’s current environmental laws, although this mandate was eventually abandoned and left unfulfilled (Wacaster 2010).

Under President Rafael Correa’s government, which began in 2007, extraction of oil and mineral resources was used to drive spending for social and economic programs, reducing unemployment and poverty (Latorre, Farrell, and Martínez-Alier 2015). This economic model is often called “extractivism”. This was made possible, in part, but the promulgation of new mining laws in 2009, which eased restrictions on mineral exploration and extraction (Wacaster 2012). Yet, alongside the development of extractive industries, Ecuador under Correa became the first nation on Earth to enshrine the rights of nature into its constitution, under the guiding principle of sumak kawsay (kichwa for “good life”, which defines the relationship between people, the state, and nature) (Revkin 2008). While extractivism and a recognition of the rights of nature may seem contradictory, the Ecuadorian constitution — as a reflection of the political philosophy of Correa and his ruling PAIS coalition — applies the concept of sumak kawsay in such a way as to link it to state sovereignty and the management of natural resources (Bernal and Panel 2013).

The interplay between extractivism and development in Ecuador has been further complicated by rampant government corruption, culminating in the arrest of Vice President Jorge Glas on 3 Oct 2017 (Associate Press 2017). Mr. Glas is under investigation for corruption related to the dispensation of oil extraction concession in the Amazon basin while he was Coordinating Director for the office of Strategic Sectors. His office was also responsible for promoting and negotiating new mining concessions.

The Ministry of Mines issued new rules governing the acquisition of mining concessions in the spring of 2016, leading to the bidding and auctioning of mineral concessions in State possession throughout that year (Ministry of Mines 2016). From the middle of 2016, a massive increase in new exploratory mining concessions across the country has been announced by the Ecuadorian Ministry of Mining (Fig. 1A), largely resulting from the auctions that followed the announcement of these new rules (Minka Urbana 2017; “Agencia de Regulación Y Control Minero” 2017). Though Ecuador elected a new president, Lenín Moreno (also representing the left- leaning PAIS coalition), these concessions are the product of regulatory changes under Correa’s administration. The newly elected president, likely responding to allegations of corruption, has announced a plebiscite, which will include a referendum question on mining in protected areas: “Do you agree to amend the Constitution of the Republic of Ecuador to prohibit, without exception, metal mining at all stages in protected areas, intangible zones, and urban centers?” (Staff 2017). Here, we hope to add to the interest in this referendum by providing concrete visualization of how these new mining concessions interact with the national system of protected lands, ecosystems of particular conservation interest, and the territories of Indigenous peoples in Ecuador. 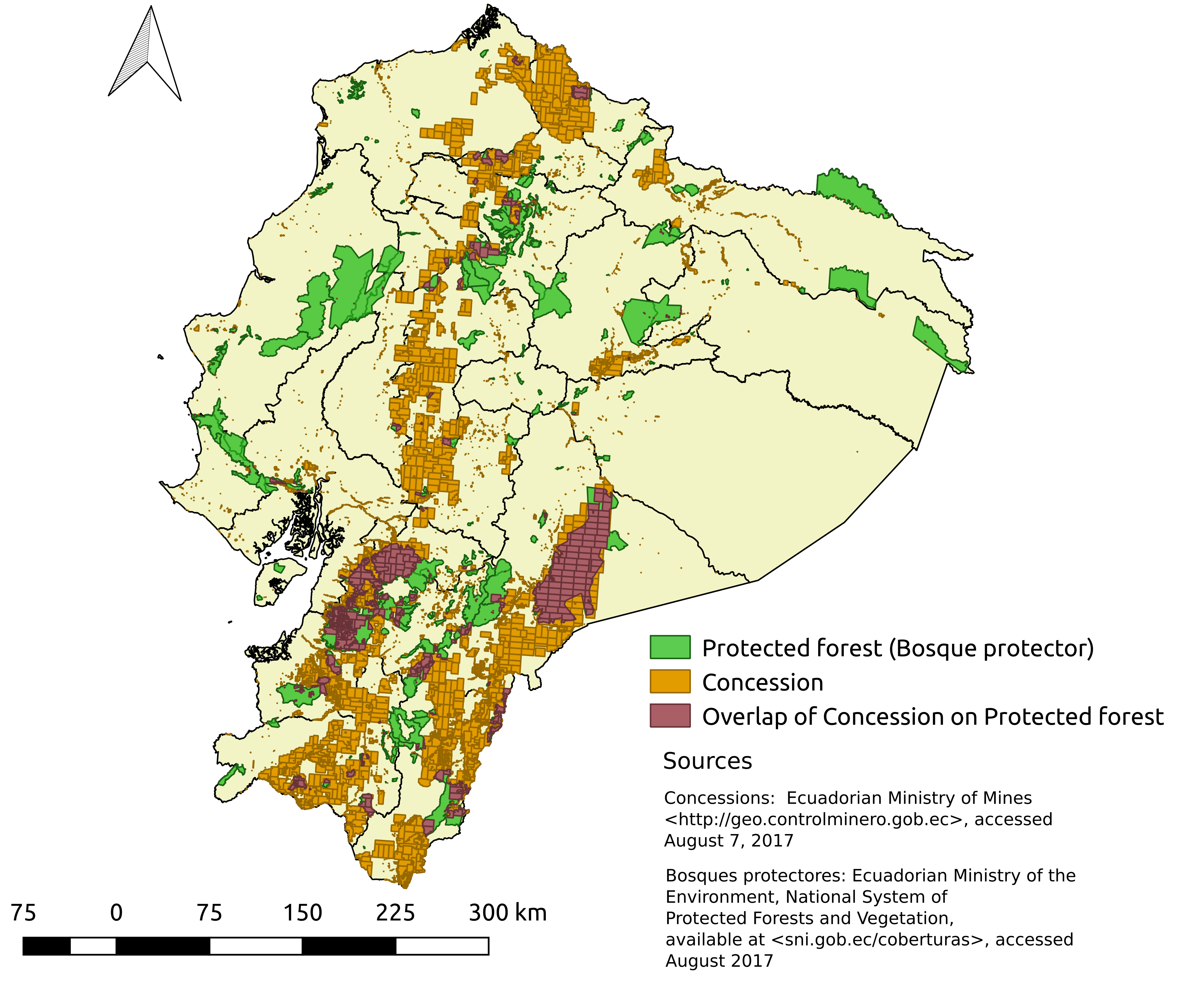 Ecuador’s system of protected forests is of particular importance, because it protects Andean mountain forest habitat, much of which is cloud forest (Fig. 2A). Cloud forests play important roles in the hydrological cycle of tropical mountain systems (Postel and Thompson 2005) and harbor great biological diversity, including extremely high rates of endemism (Gentry 1992). Because of these factors, the tropical Andes are often considered one of the most critical conservation priorities worldwide (Myers et al. 2000). In Ecuador, much of this montane forest zone is particularly degraded through land-use change, including logging, clearing for agriculture, and urbanization (Mosandl et al. 2008). The vast majority of mining concessions in Ecuador are in the Andean forest (Fig. 2A). In total, 78% of all existing concessions are in this incredibly important zone, and roughly 35% of Ecuador's Andean forest zone is currently under concession, somewhere around 2,890,000 ha.

The country of Ecuador contains traditional lands of several extant Indigenous peoples. There have been conflicts between extractivist policies of the Ecuadorian government and the Indigenous people that live on land conceded for extraction in the past (Sawyer 2016), so it is no surprise that the current increase in mineral concessions impacts Indigenous lands (Fig. 3).

We would like to caution here that the extent of Indigenous lands is approximate for all group discussed, save for the Awá. Data for Indigenous territories were gathered from various sources in Ecuador, including Indigenous rights and anti-mining activists, who prefer not to be named in this publication. Data for the extent of the Awá lands was directly from the Federación de Centros Awá del Ecuador. While these are merely our best estimates at the extent of infringement on Indigenous lands, it should be noted that the unofficial nature of these boundaries does not diminish the impacts these mining concessions will have on Indigenous peoples. The post-colonial governments of the world have a vested interest in downplaying the holdings of their indigenous people (Frankema 2005).

Among the territories of largest landholding Indigenous groups, approximately 995,426 ha are within mining concession, or nearly 14% of estimated Indigenous lands in Ecuador (Fig. 3). Some groups are more highly affected than others. For example, Awá lands cover roughly 116,544 ha of land in the northwest of Ecuador, along the Colombian border; 81,179 ha of their land is included in recent mining concessions, nearly 70% of Awá territory. The territory of the Shuar people spans an estimated 1.6 million hectares of land in the Amazonian rainforests in the southeast of Ecuador. Of this, more than 860,000 ha are included in mining concession, more than half of their territory.

Mineral concessions were granted without free and informed consultation of the affected Indigenous groups, as is required by the Ecuadorian constitution (Title II: Chapter 4, Article 57.7; (República del Ecuador 2008). This is of particular concern, given the history of violence that has accompanied both the exploration and installation of mineral extractive projects in Indigenous communities (van Hulst Miranda 2016).

The contradiction between Ecuadorian extractive and conservationist policies expands to all conservation categories, not just those mentioned herein. Of particular note, mining concessions in Ecuador also overlap with Intangible (or “no-go”) Zones, the System of National Parks (SNAP), and the lands governed under the Socio Bosque program (Ministerio del Ambiente 2017), which allows for designation of individually or communally owned land as protected. Of note, mineral concessions do not generally overlap with the boundaries of the 11 large National Parks in the SNAP system, though some concessions exist in other classes of SNAP land; however, roughly 11% of land managed under the Socio Bosque program is included in new mining concessions.

While not all categories of protected land in Ecuador have the same conservation objectives nor the same rules governing them (some may even allow certain exploitation activities), this does not negate the contradiction apparent within the Ecuadorian state: the fact remains that policy governing conservation and policy governing non-renewable resource extraction are in direct contravention to each other. It should also be noted that these categories of protected areas — bosques protectores, the IBAs, and ancestral Indigenous territories — are intrinsically linked and mutually produced: bosques protectores may cover Important Bird and Biodiversity Areas on Indigenous lands. It is important to not forget that these areas are interconnected, and often refer to the same space, which is impacted by mining activities leading to the process of deterritorialization (Haesbaert and Mondardo 2011).

While exploratory mining concessions may only cover a small portion of a protected area, the process of exploration often leads to the permanent degradation of protected lands; the building of roads increases accessibility to remote forests, leading to erosion, logging, and clearing of forests for farmland by landless people, regardless of the legality of such actions. The imposition of mining concessions on protected land does not necessarily scale with the size of the area impacted: even unsuccessful exploration may lead to the permanent degradation or degazettement of a protected area (Mascia and Pailler 2011). Additionally, seemingly small-area disturbances relative to the total area of a reserve can have far- reaching environmental consequences, particularly with regards to watershed health (Tarras-Wahlberg et al. 2001). It is important to consider that mining may have impacts far downstream of active projects, impacting conservation and social outcomes (Velásquez 2012).

While we hope that the information provided herein will help lead to beneficial conservation outcomes in the upcoming referendum vote, it is important to acknowledge the fundamental conflict between Ecuador’s existing mining and conservation policy frameworks. Such a ‘correctional’ vote on mining policy is only a stopgap; eventually, the Ecuadorian people will have to address this fundamental conflict.

This work originally prepared on November 5, 2017. The original version stated that all new concessions were announced in August 2017; August 2017 was when concessions were available through the Ministry of Mining’s ARCOM website (which we have viewed as the primary source of public information on mining concessions), but many were announced before that, back to the change in the mining law in spring of 2016, though information on such concession was difficult to access. The article has been update to reflect that change in our understanding of when information was available to the public.

1Institute of Ecology and Evolution, University of Oregon, Eugene, Oregon

Bernal, Angélica Maria, and Afr Panel. 2013. “The Law and Politics of the ‘Good Life’ in Ecuador: Sumak Kawsay, Extractivism, and the Naturalization of Sovereignty.” In Unpublished Conference Paper Presented at Latin American Studies Association Meeting May, 30:2013.

Horstman, Eric. 2017. “Establishing a Private Protected Area in Ecuador: Lessons Learned in the Management of Cerro Blan- co Protected Forest in the City of Guayaquil.” Case Studies in the Environment. University of California Press Journals. http://cse.ucpress.edu/content/early/2017/06/24/cse.2017.sc.452964.abstract.

Latorre, Sara, Katharine N. Farrell, and Joan Martínez-Alier. 2015. “The Commodification of Nature and Socio- Environmental Resistance in Ecuador: An Inventory of Accu- mulation by Dispossession Cases, 1980–2013.” Ecological Economics: The Journal of the International Society for Eco- logical Economics 116 (Supplement C): 58–69.

República del Ecuador. 2008. “Constitution of the Republic of Ecuador.” http://pdba.georgetown.edu/Constitutions/Ecuador/english08.html.

Sawyer, Suzana. 2016. “Indigenous Initiatives and Petroleum Politics in the Ecuadorian Amazon.” The Environment in Anthropology: A Reader in Ecology, Culture, and Sustainable Living. NYU Press, 222.

Velásquez, Teresa A. 2012. “The Science of Corporate Social Responsibility (CSR): Contamination and Conflict in a Mining Project in the Southern Ecuadorian Andes.” Resources Policy 37 (2): 233–40.

This document is available for use under a Creative Commons Attribution-NonCommercial-NoDerivs 2.0 Generic (CC BY- NC-ND 2.0) license (https://creativecommons.org/licenses/by-nc- nd/2.0/).